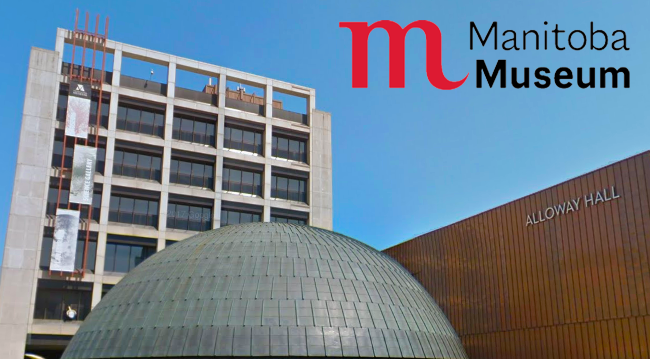 Four years after the Province of Manitoba was created, a paragraph appeared in the Winnipeg Free Press imploring the citizens to establish a historical society and museum for the preservation of the area’s rich history. It would take another 100 years before the Manitoba Museum we know today officially opened its doors on July 15th, 1970. Once called the Manitoba Museum of Man and Nature, the Museum is a modernist masterpiece built as part of the Manitoba Centennial Arts Centre, a joint celebration of Canada’s centennial in 1967 and Manitoba’s centennial in 1970. Nearly 150 years after it was first proposed, the Manitoba Museum has grown to become an important keeper of the province’s culture, continually reevaluating and modernizing to reflect best practices and a more conscientious and inclusive view of history.

“Quite a number of gentlemen of the city have been canvassing the subject of forming an Historical Society. It is to be hoped that the matter will not be permitted to drop. The territory represented by the City of Winnipeg is wonderfully rich in records of events occurring during its long regime of semi-civilization, and these documents should be carefully preserved. A museum might also be formed, the material for which could be easily collected throughout the length and breadth of the North-West. Large quantities of relics of the lamented Sir John Franklin’s expedition exist, and added to these other articles which have had connection with the prominent historical events can easily be procured. Let us have an historical society and museum. Many things which are common enough now will be looked upon with curiosity by our children.” 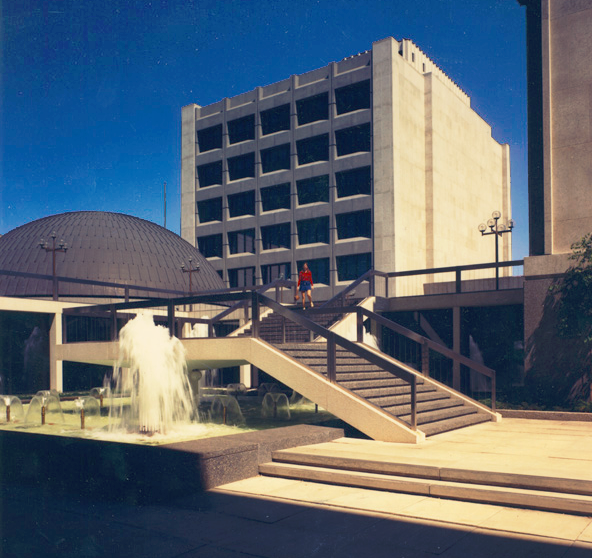 The Manitoba Museum, some time prior to 1995.
Source: University of Manitoba: Landmarks, Monuments & Built Heritage of the West

Interest in a provincial museum gained momentum in the 1930s, likely due to concerns about Canadian artifacts being exported to the United States. Manitoba was urged to open its own museum to help preserve the nation’s cultural riches, as national museums surely would never be able to accomplish such an enormous task on their own. With this in mind, half a dozen people attended the informal opening of the first Manitoba Museum on December 15, 1932 at 10:00am. The Museum consisted of a gallery on the third floor of the Civic Auditorium at 200 Vaughan Street. Exhibiting a collection of Indigenous arrowheads, flints and axes as well as a collection of moths and butterflies from around the world. The plan was for the Museum to showcase the “rare and wonderful objects… which already exist in Winnipeg” (Winnipeg Tribune – December 15, 1932, page 3) along with collections on loan from other organizations.

“Every province will have to share the responsibility if we do not want to see treasure after treasure leaving our borders never to return.” 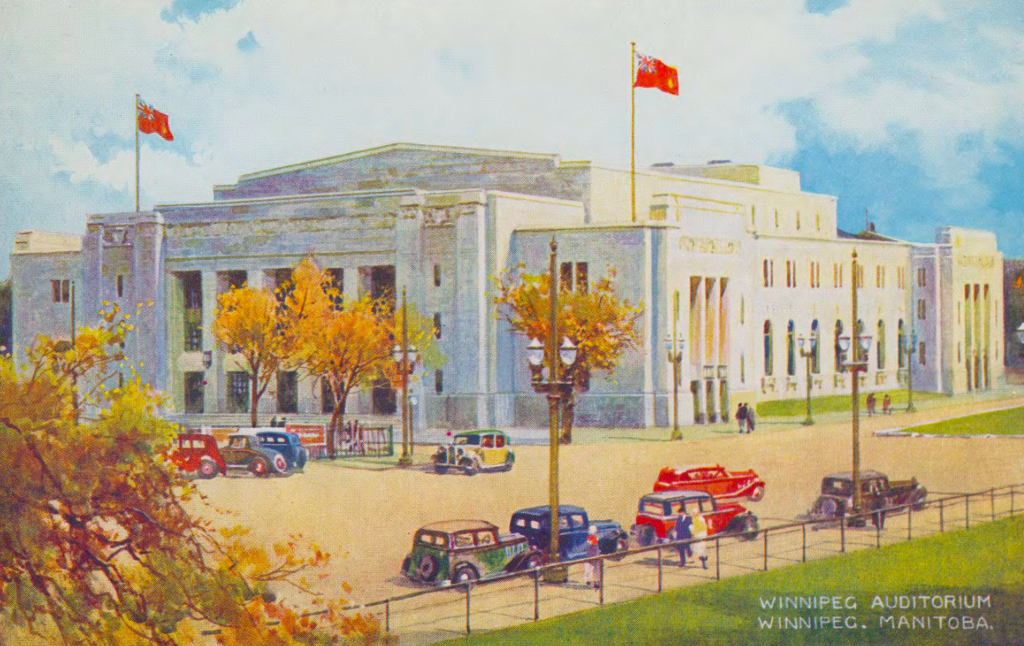 The 1932 Civic Auditorium, which was built as a make-work project during the Great Depression. Along with the original Manitoba Museum, it also housed the Winnipeg Art Gallery and Winnipeg Symphony Orchestra before it was renovated and reopened as the Manitoba Archives Building in 1975.
Source: PastForward

Over the years the collections of the Manitoba Museum grew, but its space was limited to odd makeshift galleries on the first and third floor of the civic auditorium, with storage spaces full beyond capacity. By the middle of the 1940s, priceless artifacts offered to the Museum such as a Red River cart, had to be turned away due to lack of space. The Museum’s Director, L. T. S. Norris-Elye, yearned to display a replica of the room that Louis Riel occupied at Upper Fort Garry, filled with valuable authentic artifacts. But even with free rent, the Museum, operated by the Manitoba Museum Association, could not afford additional staff never mind a new building. In 1958, Mayor Stephen Juba suggested that a new Manitoba Museum be built where Winnipeg’s “Gingerbread” City Hall stood. Juba was not fan of the ornate 1886 building, which was in poor condition and unfortunately this sentiment was shared by many others. After two wars and a depression, no one wanted to spend any more time looking at reminders of the past. But without funding, the Manitoba Museum remained hidden away at the Civic Auditorium. 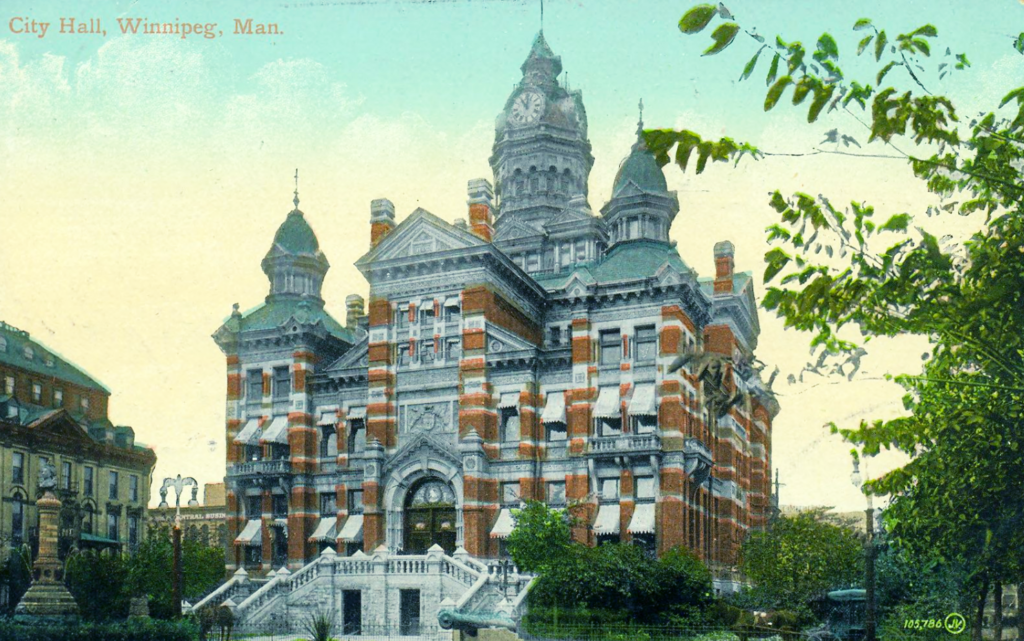 A postcard showing Winnipeg’s Gingerbread City Hall in the early 20th century. The ornate 1886 Queen Anne Revival style building was demolished in 1962 but is beloved by many Winnipeggers today.
Source: PastForward

With Canada’s centennial approaching in 1967 and Manitoba’s following shortly after in 1970, the 1960s were a time for celebrations and “legacy projects”. In 1960 Premier Dufferin Roblin proposed plans for a Manitoba Centennial Arts Centre, parts arts initiative and part urban renewal effort. Five acres of land in the downtown that included today’s City Hall complex, the Centennial Concert Hall and the current Manitoba Museum, were to be razed and rebuilt as the shiny new modernist heart of Winnipeg. A controversial plan costing millions of dollars became an issue during the 1962 provincial election. At the time Manitoba was the only province without a government funded provincial museum.

The west facade of the Manitoba Museum in 1973.
Source: University of Manitoba Winnipeg Building Index

Roblin would win the 1962 election, and convinced Juba to built his new City Hall right where the old Gingerbread one stood, instead of constructing a new one on Memorial Boulevard. The Manitoba Museum of Man and Nature and the Manitoba Planetarium were incorporated by the provincial government in 1965 (the two entities were not joined until 1972) and a new location at 190 Ruptert Avenue was selected. The esteemed Winnipeg architecture firm of Green, Blankstein, Russell joined forces with firms Moody Moore Architects and Smith Carter to create the Associated Architects for the Manitoba Cultural Centre, who were in charge of designing the new facilities. It would take all three levels of government and donations from the public to fund the construction of the $3,548,700 Museum. The Planetarium was completed first, opening in May 1968, with Her Majesty Queen Elizabeth II arriving to open the Museum on July 15, 1970.

Clarence Tillenius‘ iconic diorama at the Manitoba Museum depicting Métis people hunting bison was completed in time to welcome the Queen on opening day and continues to welcome visitors in 2021.
Source: Robert Linsdell

A modernist building with vast facades and deep set windows, the Manitoba Museum uses concrete, tyndall stone, metal and glass to create clean lines and geometric patterns. Its design coordinated well with the Centennial Concert Hall next door and City Hall across the street. The three buildings create a striking modernist complex on the north edge of Winnipeg ‘s historic Exchange District. The collection from the Manitoba Museum’s first incarnation at the Civic Auditorium was the bases of the collection for the new Museum, which has been expanding ever since. New galleries were opened and additions were added to accommodate the ever changing displays, and to better reflect the rich diversity of the flora, fauna and people of the province. The completion of the 1974 addition was a particularly memorable one, for it was built to accommodate the Nonsuch, a 1968 replica of the 1650 merchant ship that sailed to Canada in the late 1660s to trade for furs. Many Winnipegger’s have memories of stepping back in time aboard the grand ship! 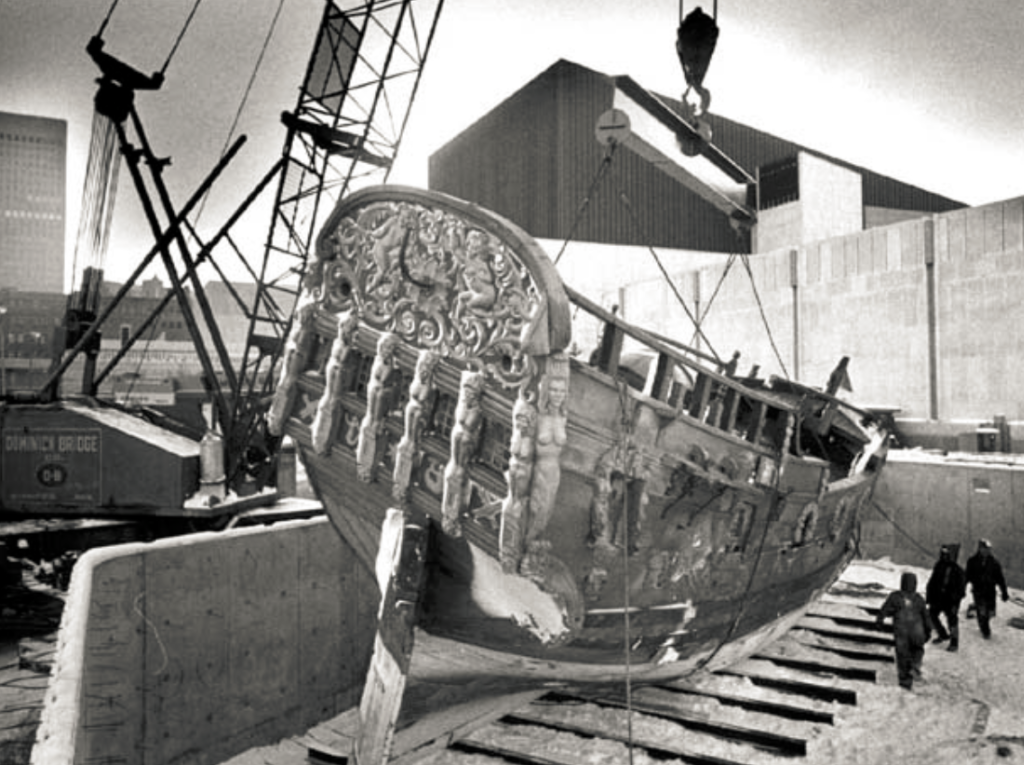 The installation of the Nonsuch at the Manitoba Museum on November 21, 1973.
Source: Winnipeg Tribune Photo Collection

Most recently the Museum embarked on their Bringing Our Stories Forward Capital & Endowment Campaign, a three step renewal project. First, an expanded and refreshed Alloway Hall was opened in spring 2017, ready to celebrate Canada’s 150th birthday. Next was a gallery renewal effort, focusing on updating the stories of Indigenous peoples and new immigrants. This step also included the opening of the brand new Winnipeg Gallery on November 1, 2019, “dedicated to the history of the dynamic city“. The second step was completed in time for the 50th anniversary of the Museum and Manitoba 150 celebrations. Moving forward, the third step in the plan is the construction of a stand alone Science Centre and Community Commons. These will include education facilities, conservation labs and collections storage space.

“Our understanding of Manitoba’s place in the world is deeper and richer today. We know more and we have new perspectives on our past. And this knowledge needs to be reflected in the stories we tell,” campaign chair Jeoff Chipman said. “History is not stagnant; it moves forward and the time is right to renew our museum.” 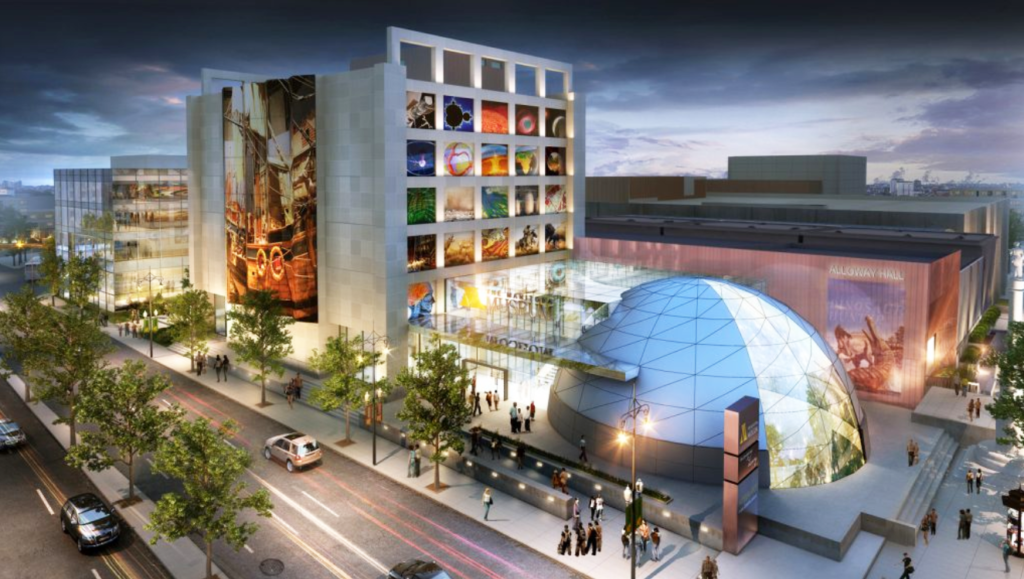 An artist’s rendering of what the Manitoba Museum will look like after completion of the third step in the Capital Campaign, with the addition of a Science Centre and Community Commons.
Source: Manitoba Museum

The continual evolution of the Manitoba Museum is a representation of what takes place at all museums, always changing to reflect our evolving culture. Once the realm of professionals scrambling to conserve artifacts before they were lost forever, museums today provide a safe space to reexamine traumatic history, learn new perspectives, better understand our place in the world and cultivate compassion for the diverse human experience. Keepers of history are now invited to work alongside professionals, sharing their valuable knowledge and insights, enriching and reshaping our understanding of the past.

“In a global social and political climate that is fought with uncertainty, museums are even more important as a gathering place to present and understand different perspectives.”

Museums are hubs of research and a resource for professionals, a place of continuing education and gathering for the community. Museums contribute to our economy, providing employment, draw in tourists and often adaptively reuse our built heritage. They are an important part of our community that belong to us all, keeping our history safe and helping us plot a brighter course for our future! 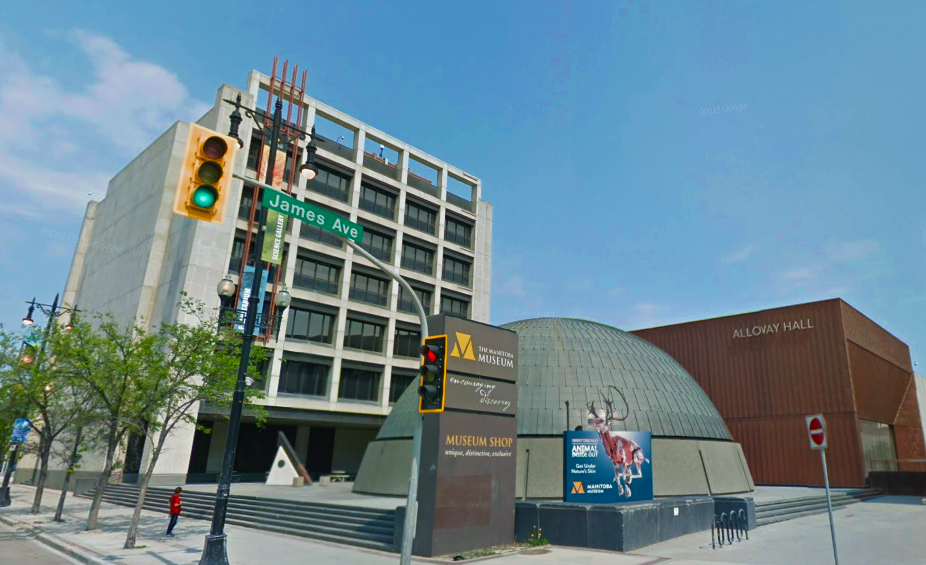 The Manitoba Museum in May 2019.
Source: Google Maps

City Hall Building and its History | City Of Winnipeg

Manitoba Museum of Man and Nature | Read The Plaque