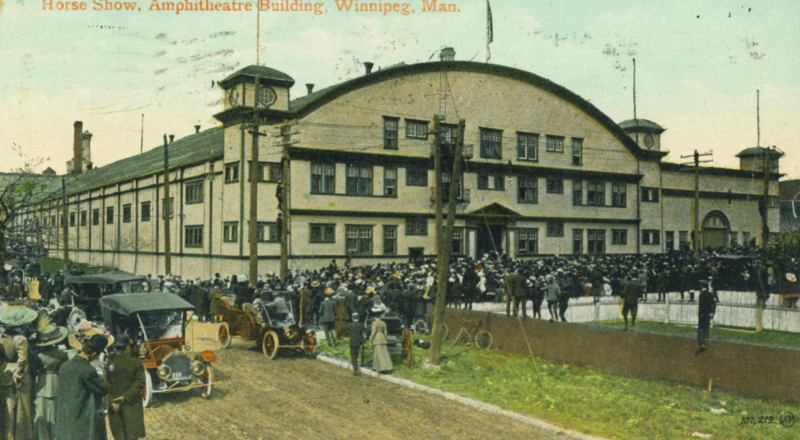 Winter is an inescapable fact of life in Winnipeg, and for centuries those who live here have learned to make the best of it. Skating trails along the river were introduced to Winnipeg in 1872, and hockey followed shortly after. The exact origins of ice hockey are disputed, but what is known is that the sport was created in Eastern Canada in the 1870s and popularized at the 1887 Montreal Expo. 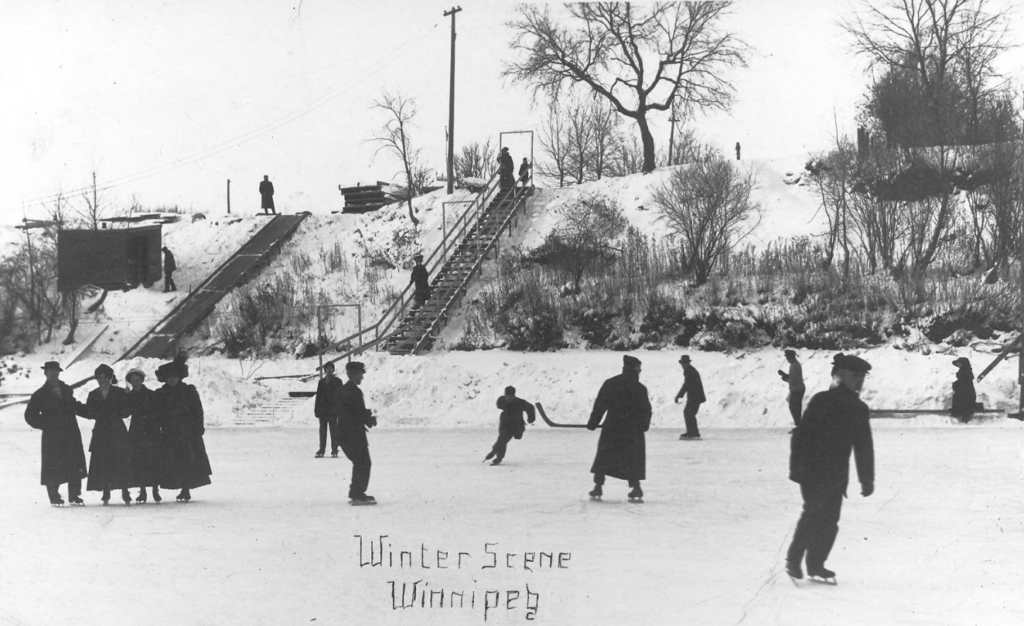 Winnipeggers enjoy the winter by skating on a frozen river in the early 20th century.
Source: PastForward

It took only two years for hockey to officially reach Winnipeg after this point, when two hockey teams were founded: The Winnipeg Victoria’s and the Winnipeg Hockey Club. A number of rinks, indoor and outdoor, were constructed across the 1890s to accommodate Winnipeg’s growing number of hockey teams and other avid ice skaters. In 1898 a group of Winnipeg’s prominent businessmen got together to finance an arena that would surpass the others, among them prominent citizens such as E.L. Drewry, J.H. Ashdown, F.W. Stobart, and A.M. Nanton. The Winnipeg Auditorium Rink opened in 1899, and for a time was the premiere ice hockey destination in Winnipeg! There was one major difference to today’s hockey rinks: the ice was real, and thus dependent on temperature. By the 1910s, technological advancements allowed the creation of artificial ice maintained by refrigeration, which meant ice quality was no longer dependent on the weather. This new technology reached Winnipeg when the Winnipeg Amphitheatre (or Shea’s Amphitheatre) was renovated in 1919. 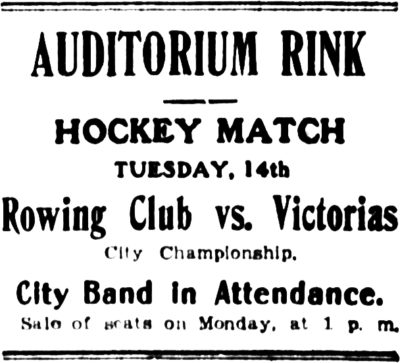 At the time of it’s opening in 1909, the Winnipeg Amphitheatre at 49 Whitehall Avenue was one of the largest rinks in Canada, and following the 1919 renovation, it was the only rink with artificial ice between Toronto and Vancouver! During the first year of operation, the rink was dedicated exclusively to skating – much to the disappointment of Winnipeg’s hockey enthusiasts. This changed after a year. In 1910, the Amphitheatre chose to cater to Winnipeg’s many hockey clubs, much to the delight “of the followers of the stick and puck”. 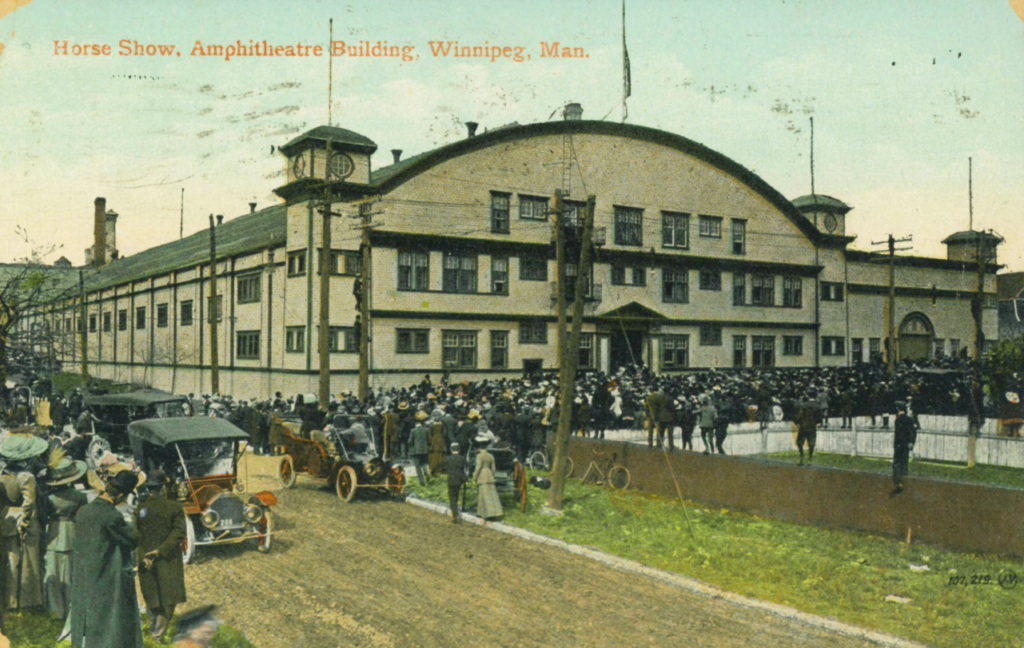 The Amphitheatre was designed by architects Ralph B. Pratt and Donald A. Ross, and was not initially meant to be a skating rink. In fact, the $40,000 building was originally built for the Winnipeg Horse Show Company, which planned to host horse shows in it. But with its high vaulted roof and large seating capacity, the Amphitheatre would quickly prove itself the ideal location for a large variety of Winnipeg events. In the warmer months, the Amphitheatre was used for horse shows, gardening shows, public concerts, festivals, and much more. A 1950s Norwegian Week Festival used the Amphitheatre to host a concert, with a 1000 Male Voice Chorus. There were boxing matches, Shriners shows, and even rodeos! Even big name celebrities visited the Amphitheatre, such as Bob Hope in 1952. 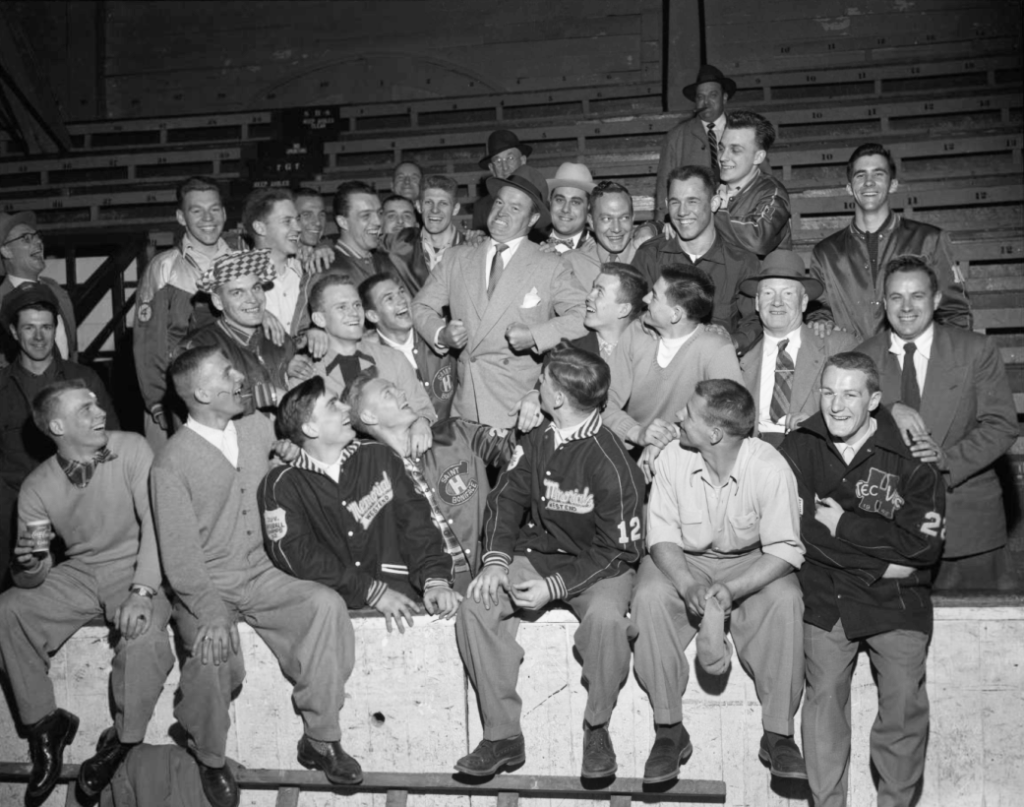 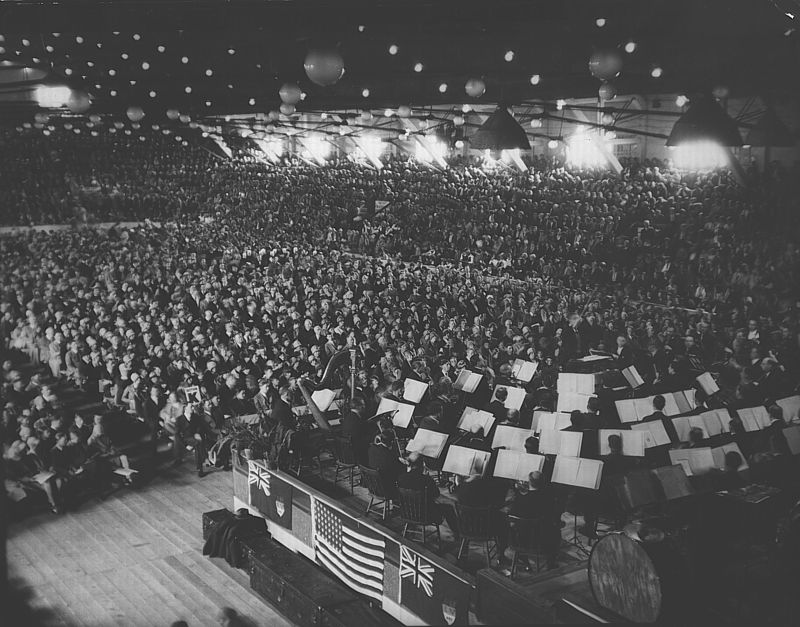 An unidentified concert at the Amphitheatre 1930s
Source: U of M, Celebrity Concert Series fonds 21, C75/1/1 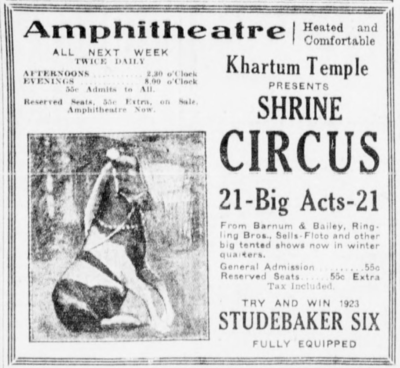 An ad for a Shriners show at the Winnipeg Amphitheatre.
Source: Winnipeg Evening Tribune 1922-10-28 (Page 3)

The surrounding neighbourhood, with the Granite Curling Club and Osborne Stadium (1935-1955) nearby, formed a makeshift sporting complex that frequently attracted large crowds to the area. Despite this, when the news broke that the Amphitheatre was being demolished in 1955, the Winnipeg Tribune’s profile of the building focused almost entirely on stories of winter recreation and hockey. Ice skating spectacles and prominent hockey teams that had graced the ice across the building’s 45-year history. 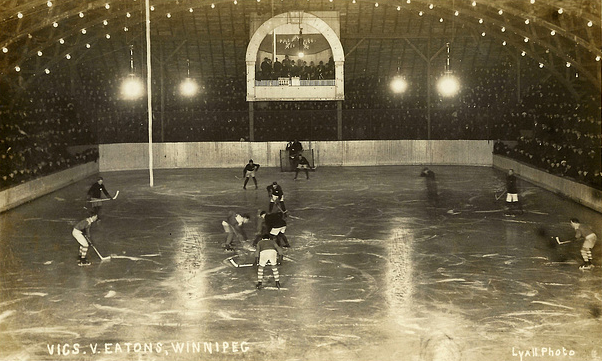 The Winnipeg Victorias squaring off against the Winnipeg Eaton’s team.
Source: Hockey Hall of Fame

As early as 1886, the Winnipeg Skating Club had taught skating lessons and organized elaborate performances. In 1929, their name changed to the Winnipeg Winter Club to incorporate other cold-weather activities. Both iterations of the group organized winter carnivals to celebrate the end of the season, and the Amphitheatre often got wrapped up in the celebrations. The 1950 Winter Carnival brought 200 costumed figure skaters to the Amphitheatre’s ice. In the years before this, one of the mainstays of the winter carnival was Winnipeg’s “Ice Queen” Mary Rose Thacker. At just 12 years old, in 1935, Thacker became the Winnipeg Winter Club senior ladies skating champion. She held this title for the next seven years, and would continue on to rack up more titles including national women’s senior champion at the 1939 Canadian Figure Skating Championships. 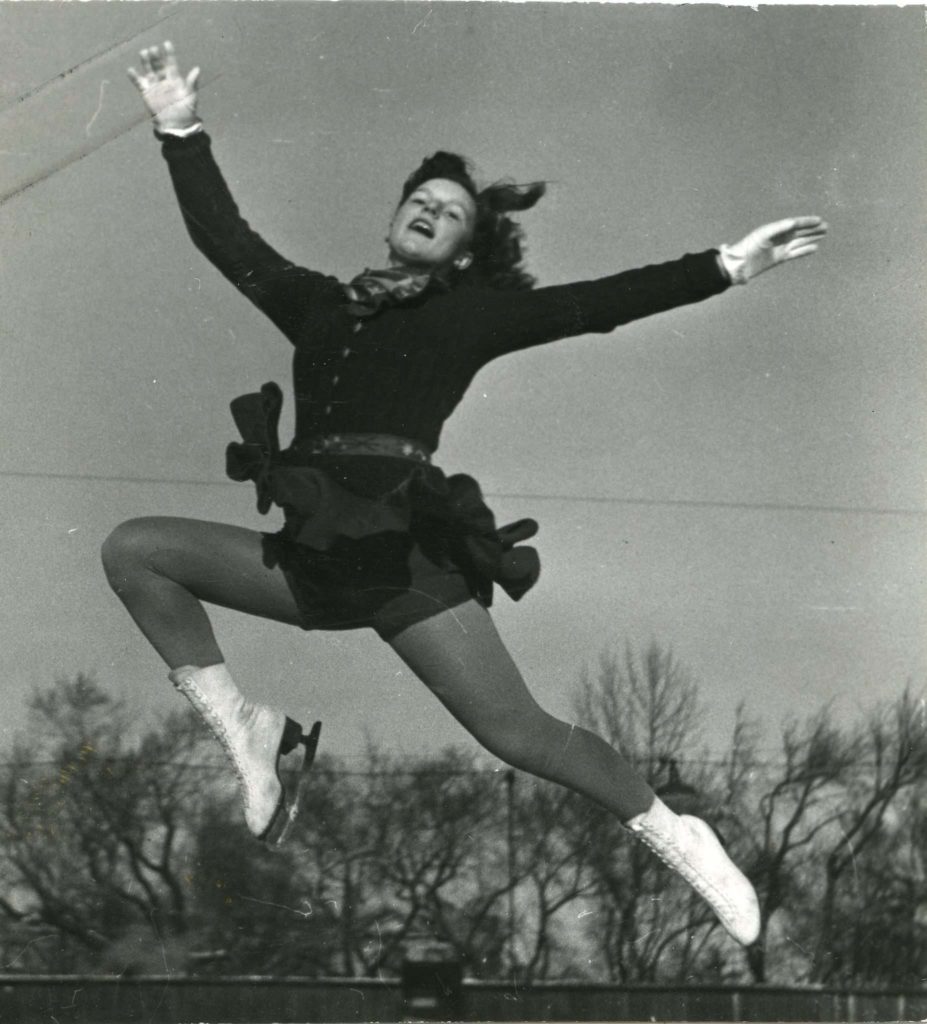 Though ice skating was always a huge draw to the Amphitheatre, nothing brought out the crowds quite like a good old hockey game. In the 1910s, teams like the Winnipeg Monarchs, the 61st Battalion, and the Winnipeg Falcons battled it out for the Allan Cup. Introduced in 1909, the Allan Cup is awarded annually to the national senior amateur men’s ice hockey champions of Canada. Of Manitoba’s Allan Cup winning teams, the Winnipeg Falcons are the most well-known. Composed almost entirely of Icelandic Canadian veterans of World War One, the team would win the first ever Olympic Hockey Gold Medal in 1921. 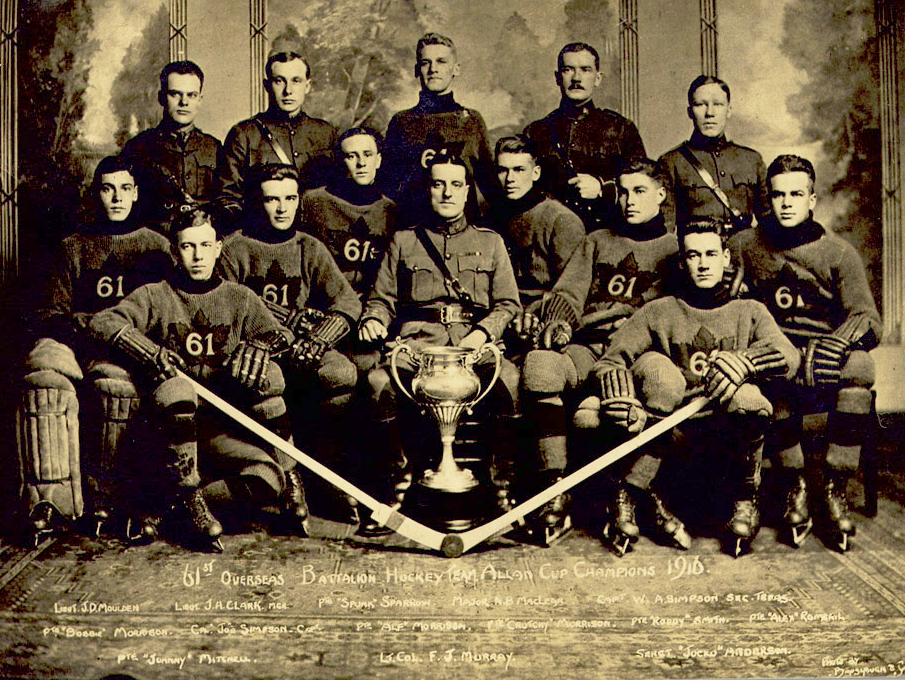 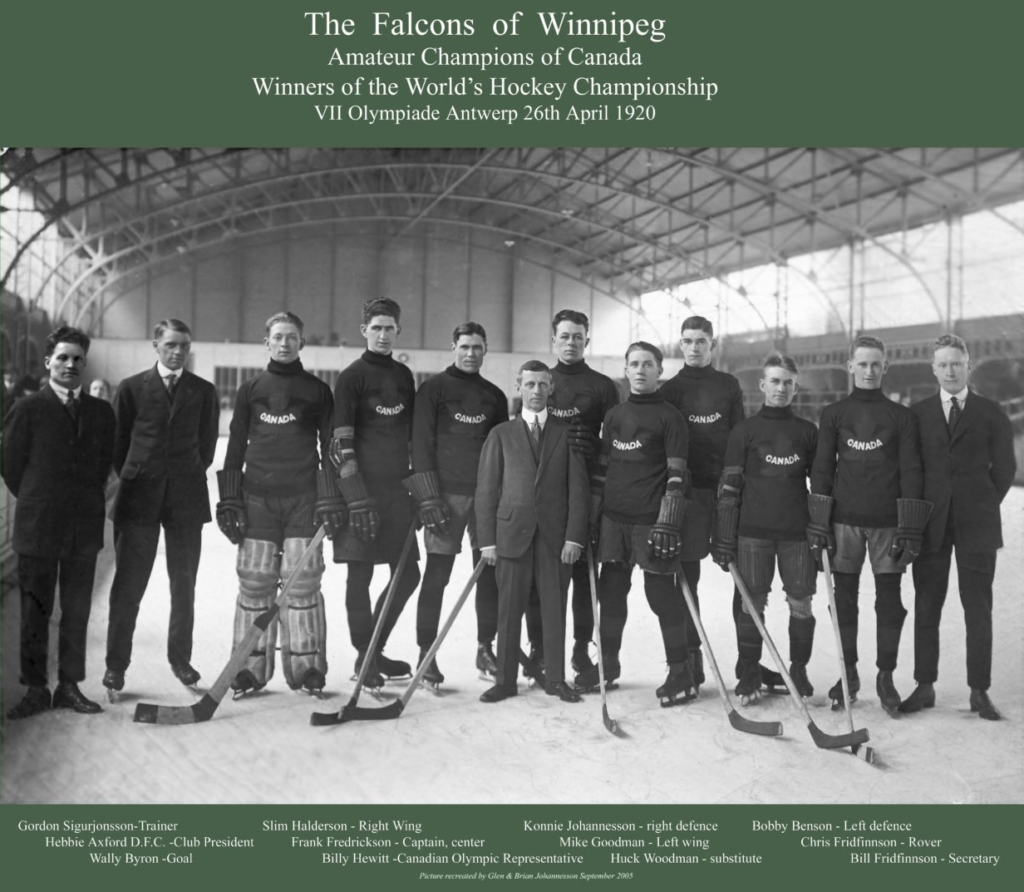 By the 1930s, teams were now at the Amphitheatre vying for a chance to win the Memorial Cup. Junior championship games were also held at the Amphitheatre, drawing in local teams like the Elmwood Millionaires, St. Boniface Seals, Portage Terriers and the Brandon Wheat Kings. Sometimes even professional teams paid a visit, even though Winnipeg lacked their own professional hockey team at the time. It was not unusual, recalled Vince Leah in 1955, for teams to line up outside the building in freezing weather just for a chance to get tickets to an exciting championship game. In 1949, tickets for a sudden death match between Brandon and Montreal were on sale for only 22 minutes, and many hockey fans had been waiting outside for over twelve hours for a chance to buy them. The police were called to manage the disgruntled crowds. 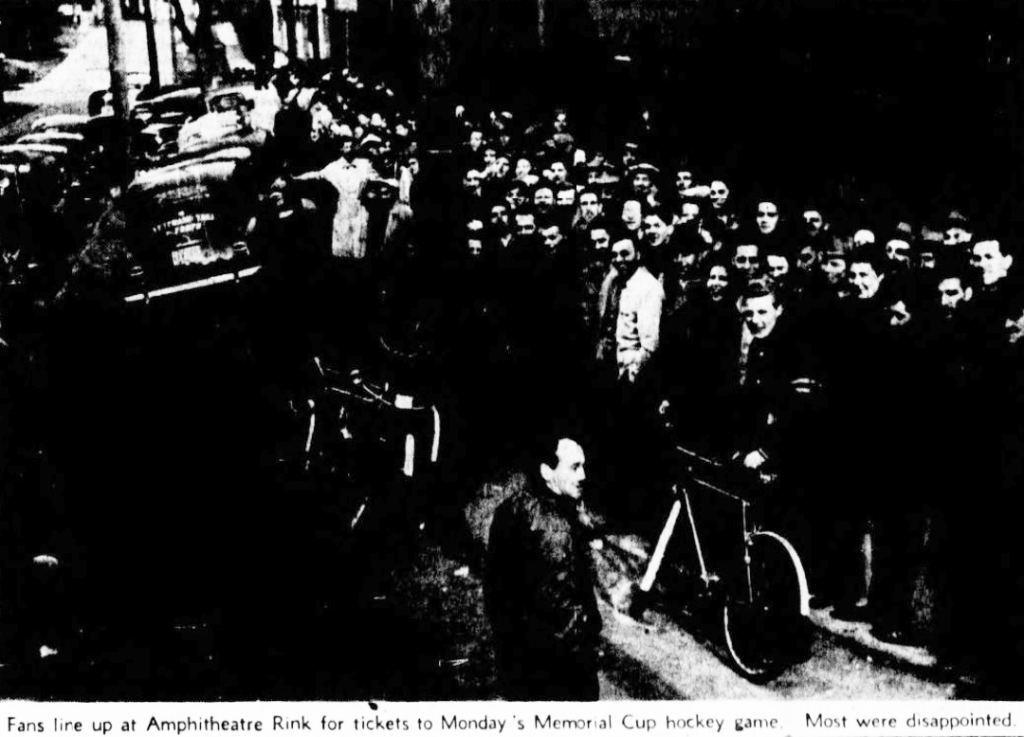 Hockey fans in line outside of the Amphitheatre.
Source: The Winnipeg Tribune 1949-05-14 (Page 1)

Members of Winnipeg’s City Council flagged fire safety concerns with the Amphitheatre in 1943, citing overcrowding as the main issue. Alderman Scott called the Amphitheatre “one of the most flammable buildings in Winnipeg”. Despite the addition of new fire exits, additional seating was often added for popular events and meant that it could be difficult to escape the building in case of fire but these fears were never realized. In 1955, it was announced that both the nearby Osborne Stadium and the Amphitheatre were to be demolished. Hockey carried on at the Winnipeg Arena at 1430 Maroons Road, while the former Amphitheatre site became home to the current Great West Life Assurance Company (now Canada Life). Though the Winnipeg Amphitheatre is long gone, Winnipeg’s passion for hockey lives on!

Morris Mott, “An Immense Hold in the Public Estimation:” The First Quarter Century of Hockey in Manitoba, 1886-1911, Manitoba Historical Society

The Granite Curling Club: History Between The Sheets