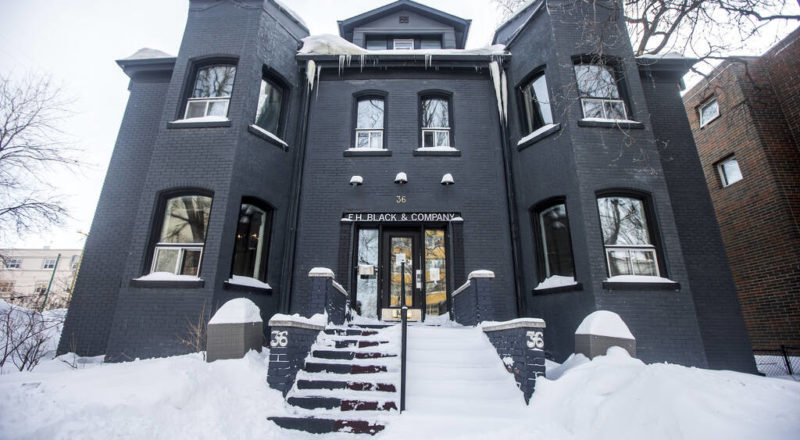 For the past couple of months, the historic J.C. Falls House at 36 Roslyn Road has been a topic of discussion due to its crumbling structure. Unfortunately, this recognized heritage building is on the brink of losing its historical designation. This blog will not only explore the building’s history but also try to unpack how this historic house could have possibly come to the point of being removed from the City of Winnipeg’s List of Historical Resources. 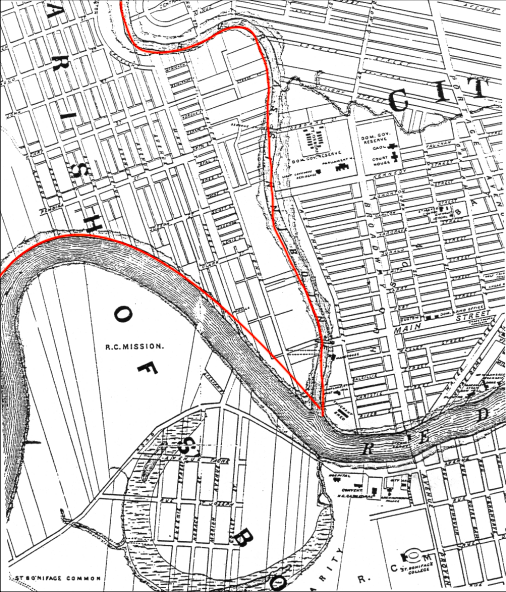 During the beginning of the 1900s, Winnipeg was experiencing an exciting period of growth. One area, in particular, that saw tremendous growth was Fort Rouge. What began as a small settlement of Francophone families in the 1870s became Ward One in the City of Winnipeg in 1882, with a wealthy population. The area’s properties attracted businessmen and other wealthy individuals and families due to its proximity to the city’s downtown without being in the bustling centre. As a result, large mansions on well-manicured lawns began popping up in the old Fort Rogue area. 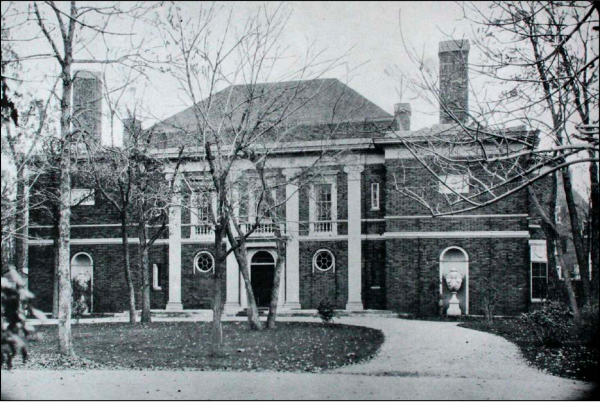 Example of the mansions that were built along Roslyn Road. 218 Roslyn Road, October 1927. Source: City of Winnipeg Report 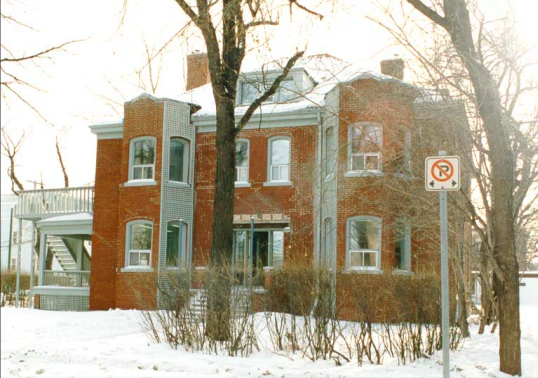 The J.C. Falls House is a two-and-a-half-storey red-brick structure that rests on a stone foundation. When it was built, the building used 19 cords of stone and 100,000 bricks to make up the solid brick walls, costing approximately $15,000. According to the City of Winnipeg’s historical report, the J.C. Falls house is described as a “fine example of early 20th-century residential architecture, it is a handsome superstructure covering a spacious interior.” 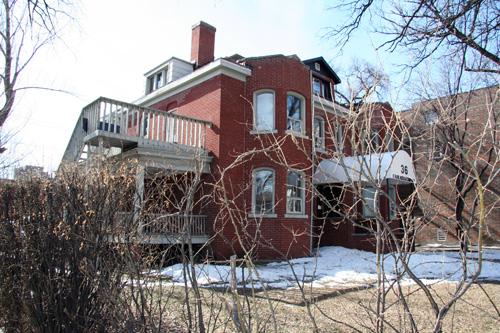 The original owner of the house was John Clare Falls. Falls was the long-time vice president and general manager of the Wood-Vallance Company, wholesale hardware and metal merchant whose offices were located at 256 McDermot Avenue. Falls was born in 1861 in Kells, County Meath, Ireland. He moved to Kitchener Ontario at an early age where he would remain for his childhood. In 1892, Falls moved to Winnipeg and took up a manager and buyer position for the George D. Wood and Company hardware business which was later renamed Wood-Vallance. From his 32 years at the company, Falls rose to the position of vice-president. He lived in the house on Roslyn Road with his wife and daughter until he died on April 11, 1924. 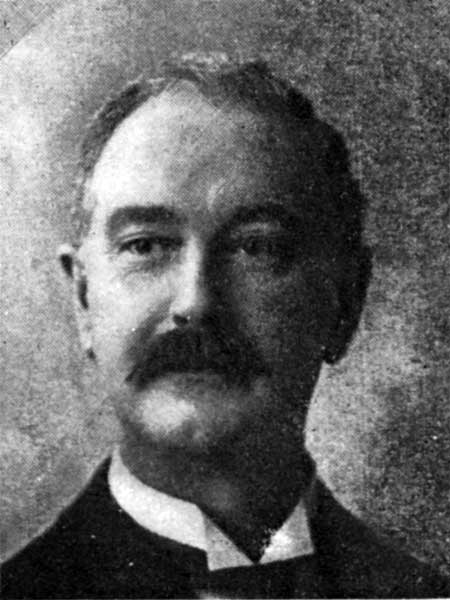 After the death of J.C. Falls, the Falls House was occupied by many and it was converted into a boarding house in the 1930s, with the Falls family remaining the owners until 1943. The transformation of the J.C. Falls House into a boarding house reflects the decline of the Fort Rouge area from the home of the city’s elite into a more working-class neighbourhood. During the 1940s, the house was occupied by 14 to 21 tenants at a time. After the Falls family put the house for sale in 1943, it was bought by Mary J. Blois but she did not live in the house but rather continued to run the house as a boarding house. Moving forward, the house was owned by Marie E. Martin, who ran St. Michael’s Nursing Home from the house into the 1970s. It was not until 1985, that the entire interior of the house was renovated and converted into office space for Locations Realty. 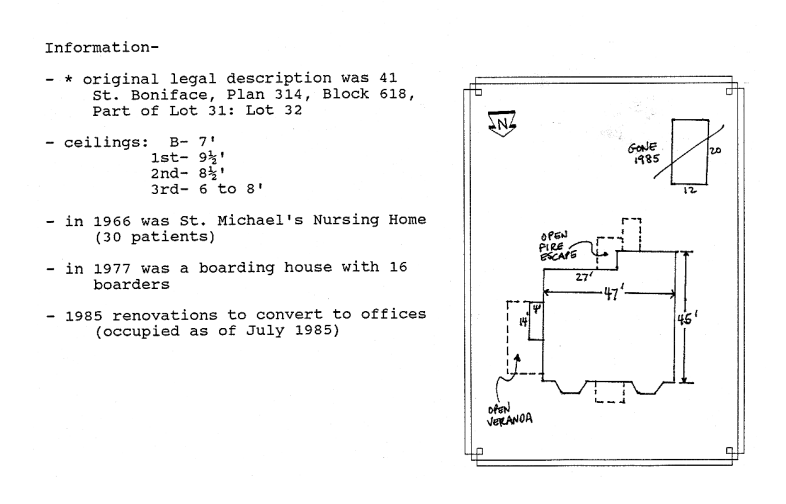 Over the years, Roslyn Road has seen many alterations. Gone are the grand mansions that once stood with their replacements standing as apartment blocks, old three-storey brick buildings, and new high-rises. The J.C. Falls House itself has experienced several renovations. Most recently, the J.C. Falls House was occupied by an alternative medicine centre called the Guvana Therapy Centre. As a result, some changes needed to be made to accommodate the medical centre, including rooms for chiropractors, massage therapists, and dentists as well as a main-floor health food store. With that said, according to the City of Winnipeg historical report, the building’s interior elements have “been sensitively carried out by the property manager and many have been retained.” 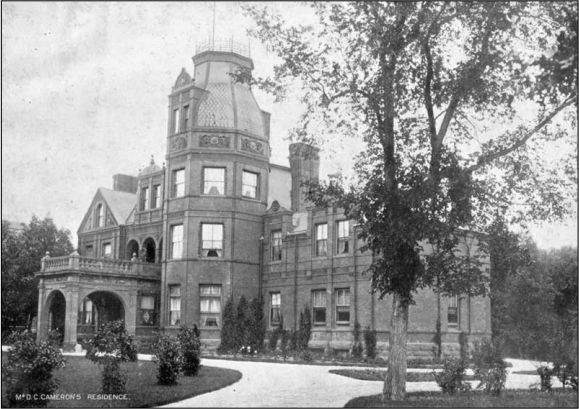 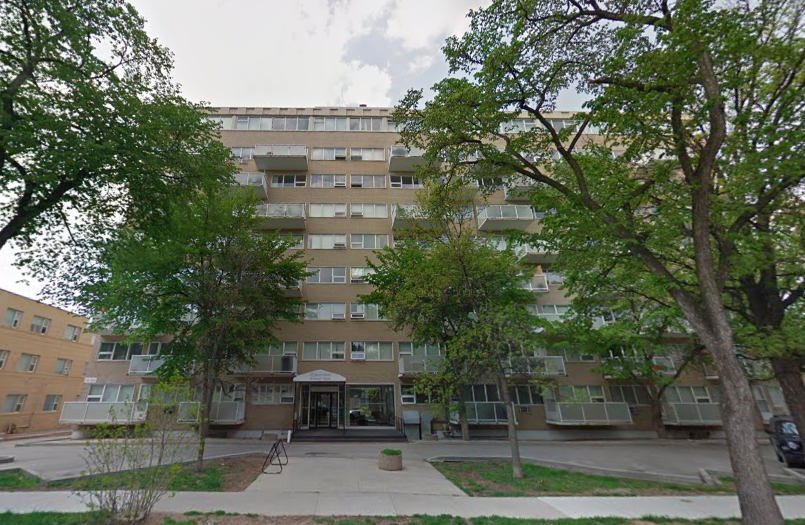 Penthouse Towers, 71 Roslyn Road. Built on the property that used to be the Douglas Colin Cameron House. Source: Google Maps

As for other alternations, the basement of the house along with its foundation has been stabilized and the original open layout has been replaced by a number of small offices. The second floor has not been significantly altered, most of the 12 rooms created when the house was converted into a boarding house in the 1930s remain to this day. Unfortunately, upon further inspection, most of the J.C. Falls House renovations have been completed haphazardly.  As a result,  the original, ornate wooden window frames that decorate the house have been destroyed, while the stone foundation continues to crumble into disrepair. This brings us to the discussion at hand, the pending delisting of J.C. Falls House from the city’s List of Historical Resources. 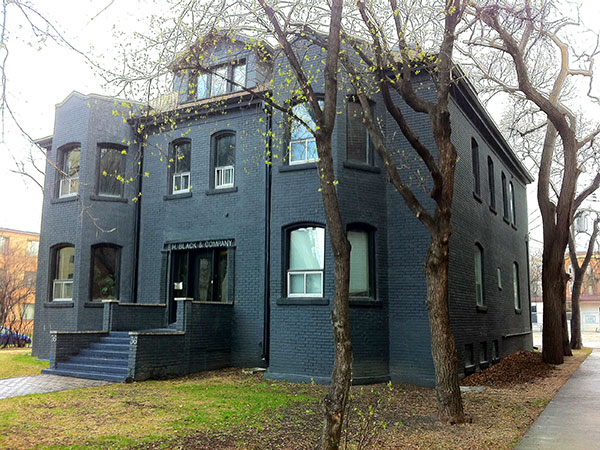 The J.C. Falls house was granted a historical designation by the City of Winnipeg in 1994. This means that as a listed heritage building, the house cannot be demolished unless delisting is requested by the owner and approved by the city.  By granting buildings historical designation, the architecture, and character of the structure are meant to be maintained, celebrated, and largely remain intact and its historical integrity should be maintained. Owners of heritage buildings should honour this type of recognition through the regular maintenance of their property, and get all proper heritage permits with respect to work related to its historical character, however, this is not always the case. 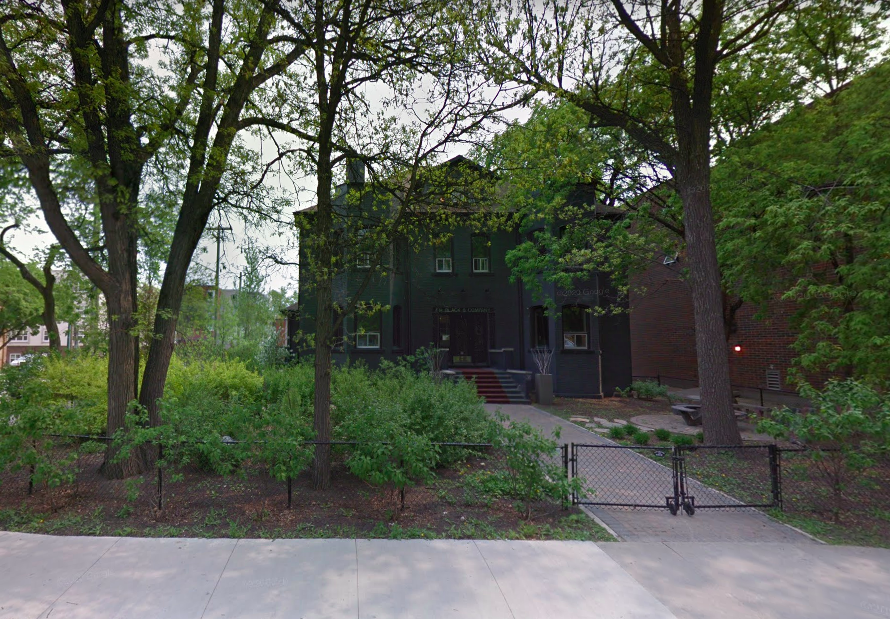 In a Winnipeg Free Press article released on February 4th, 2022, a discussion of delisting the 36 Roslyn Road building emerged. In the article, the building is said to be “critically, structurally unsound,” with the current owner hoping to delist the building so it can be demolished. Bought in August 2021, the historic J.C. Falls house is currently owned by Jerry Cianflone, owner of the Pizza Hotline chain. He said in a recent CBC News article that he bought the property with the understanding that some updates would need to be undertaken. Originally, Cianflone wanted to use the house for his office and rent the other spaces to tenants. Unfortunately, once renovations began, the building was found to be in worse space than what was expected. 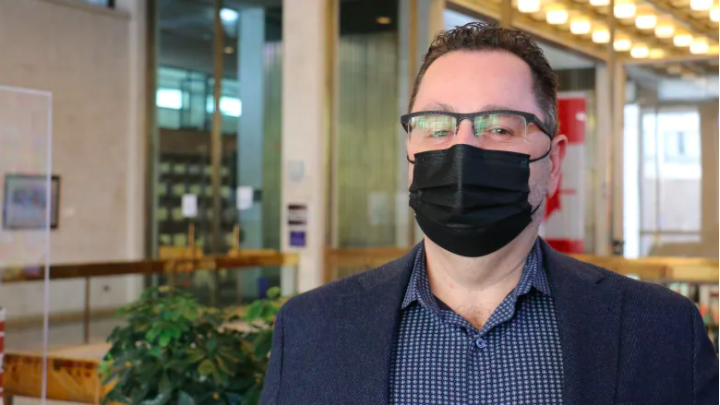 On behalf of Cianflone, Danny Serhal of Serhal Consulting asked the city’s Historical Buildings and Resources Committee to remove the property on 36 Roslyn Road from the List of Historical Resources due to its condition. Serhal said that “the building’s foundations have extensively deteriorated beyond reasonable repair; over the life of the building (by a sequence of previous owners), large areas of the basement (were) removed with poorly executed newer installations and replacements.” Furthermore, an engineer’s report reveals that the original rubble foundation walls are “in an advanced state of structural deterioration.” 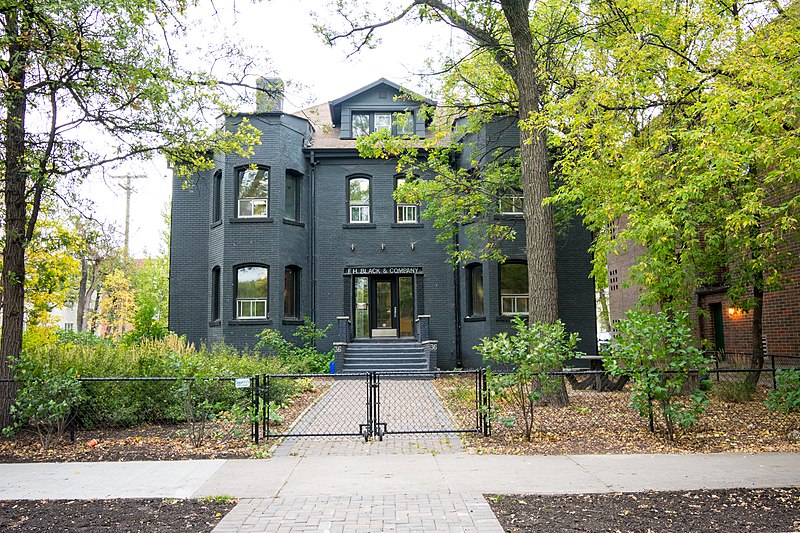 Heritage Winnipeg’s Executive Director, Cindy Tugwell, has taken an unexpected and unusual stance on this discussion. Due to the structural deterioration, Tugwell has decided to support Cianflone’s request to delist 36 Roslyn Road. She says that in her 30-year career, Heritage Winnipeg has only supported a historical delisting request twice. It was a hard decision to make, however, after touring the building herself, she found that the lack of maintenance from previous ownership was appalling. It is actions such as these that threaten the presence of historical architecture in our city and neighbourhoods. Tugwell has talked to Cianflone and says that she “thinks the owner has gone above and beyond.” Cianflone has also mentioned that in building the new structure, he would try to reuse whatever could be taken from the historic building, mainly the bricks and wooden joists. Tugwell hopes that Cianflone’s new design will fit in with the historical nature of the area and states the importance of transparency and collaboration in these moments. 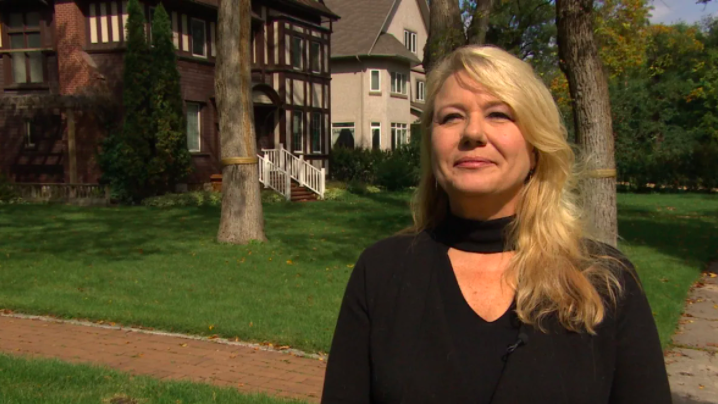 The deterioration of the historic J.C. Falls House speaks to a much broader discussion on what the city is doing to protect designated heritage buildings? Just being on the city’s List of Historical Resources does not go far enough. More financial and tax incentives to owners are needed to maintain and secure the historical elements and structural integrity of a building, along with better city oversight on regulations and inspections. If an owner is not invested in the community and allows their heritage building to deteriorate, it then runs the risk of becoming structurally unsound. It becomes vulnerable to getting delisted and sold and then subsequently demolished by a potential developer. Many infill building designs are not sensitive to the historic character of the surrounding neighbourhood, and ask for height variances and rezoning.  Heritage buildings need the right owners who will continually invest in them as an asset, so they continue to remain fully occupied and economically viable.  This is critical as if the heritage structure falls into major disrepair and is not financially feasible to repair due to low occupancy, then the building is vacated and boarded up under the city’s Vacant Buildings Bylaw.  Sadly it could sit vacant for years and become a community eyesore before the inevitable delisting is approved and demolition is granted. Meanwhile, the area residents have to deal with urban blight and safety concerns including vacant building fires.

Heritage Winnipeg is committed to working directly with the new owner along with area residents and stakeholders, to ensure that a new design will be sensitive to the historic character of neighbourhood. They are committed to the community and understand that quality design will pay respect to this historic property that we lost too soon. Also, they will use quality materials and reuse and/or donate existing materials prior to the demolition. This is the best possible outcome for a forgotten historical house that once was an integral part of the social and historical fabric of the community. 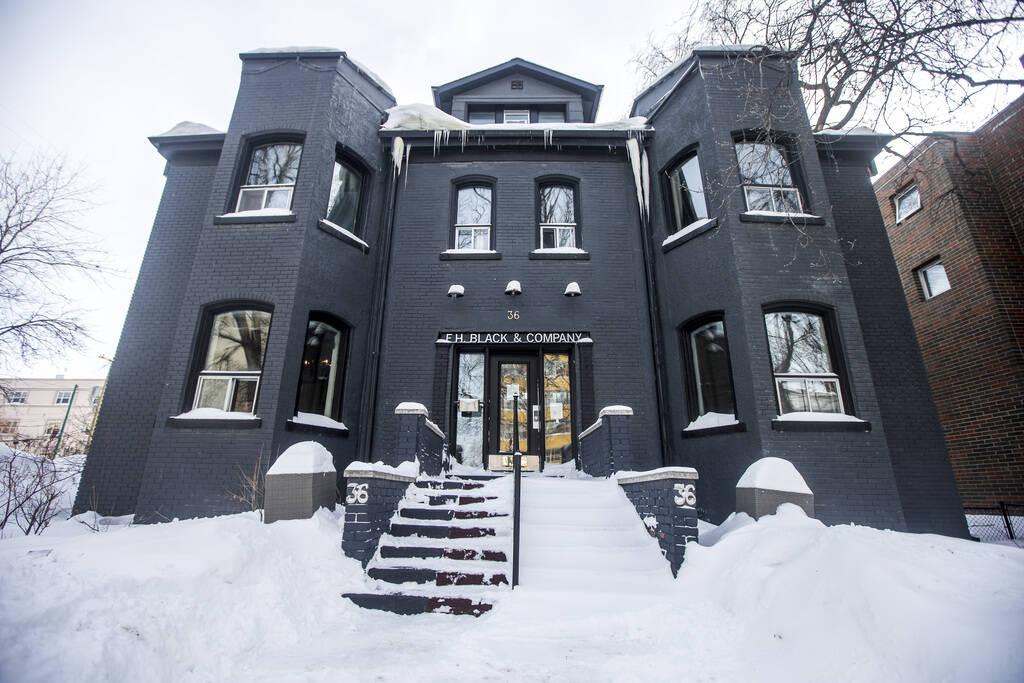 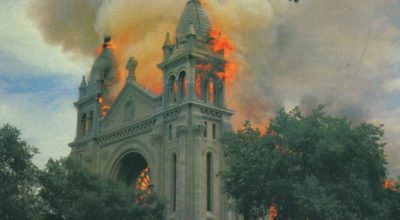 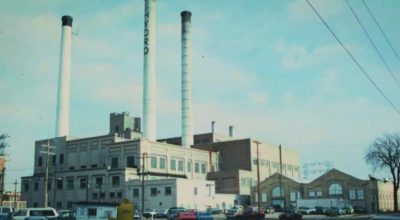