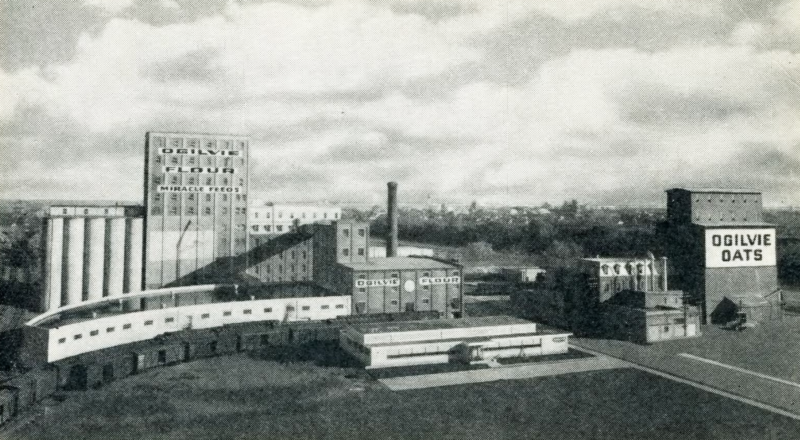 With the Grain: A History of Ogilvie Flour Mill

Standing at 53 Higgins Avenue is a building with roots dating back to the early days of Winnipeg. The Exchange District may have been the former centre of the Canadian grain industry but only two kilometres away was another incredibly important part of the the grain trade in Winnipeg. Milling grain was just as essential as being able to sell it. Long gone were the days when most people would grind their own wheat, buying it milled was easier and a whole lot cleaner.

The Ogilvie Milling Company’s decided to build a state of the art flour mill in Winnipeg in the late 19th century. Transporting grain to be milled was expensive and with Winnipeg quickly becoming a transportation hub, it became an easy decision. Due to the expansion of railways, Winnipeg was a prime location with railway lines that went almost every direction, and trains frequently departing Winnipeg. The railways supported the quick growth of Winnipeg’s population and land was quickly getting snapped up as the city expanded. 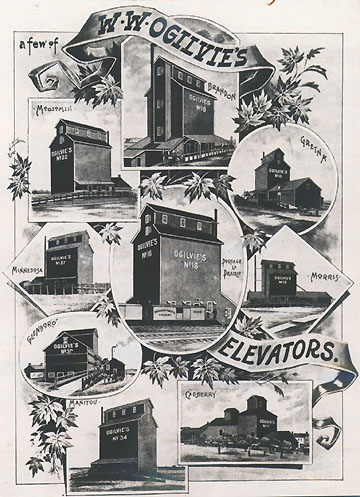 Some of the Ogilvie Flour Mills and Elevators.
Source: University of Manitoba Archives

Ogilvie’s took quick action. They bought a 4.5 acre site beside the Red River in Point Douglas for $4,000, which was later numbered as 49 Higgins Avenue. The location was just down the block from the Canadian Pacific Railway Station, being so close to the railway line made it ideal for transportation. Due to the proximity to the main rail line, Ogilvie’s had a spur line which allowed trains to come directly to them, allowing for even easier transportation of grain. Construction started in August 1881 and ten months later in June 1882, the mill was officially up and running. 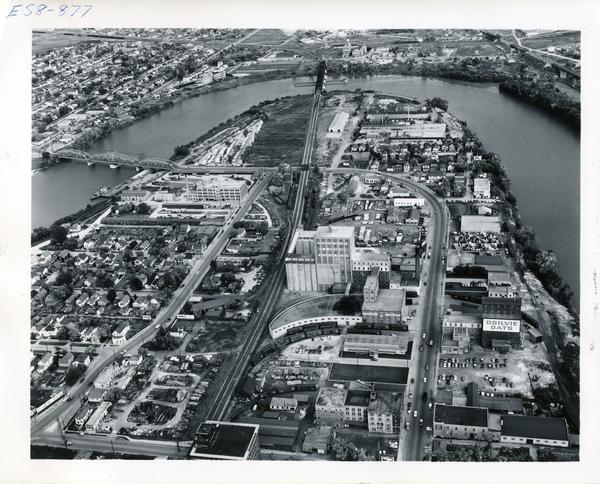 The mill in Winnipeg was Ogilvie’s first in Western Canada. The company was already well known for the flour they milled. They used a Hungarian system which used steel reduction rolls for grinding instead of millstones, producing a superior grade of flour. Alexander Ogilvie started the company 1801, with a cereal mill just outside of  Montreal. Alexander’s three sons, Alexander, John, and William eventually took over the business. They expanded the company into Ontario by constructing two mills in the 1870s, one in Seaforth and the other in Goderich. After building the mill in Winnipeg, the company expanded all over Canada. 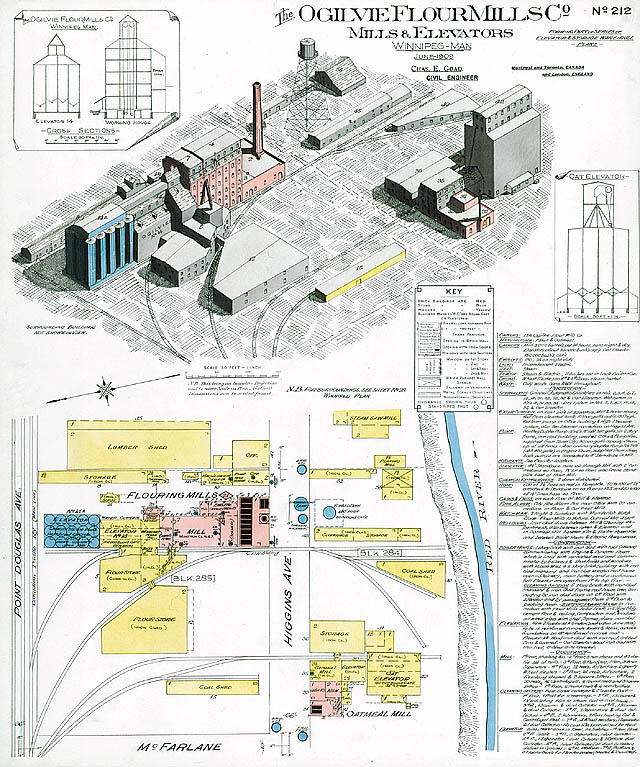 Ogilvie’s original building in Winnipeg was a six-story brick structure built upon a stone foundation. Attached to the brick building was a brick engine and boiler house, with a smoke stack that stood over 100 feet tall, making it one of the tallest structures in Winnipeg at the time. Over its 123 year history, the mill was renovated and expanded multiple times in order to keep up with demand and also the competition.  There were claims the Ogilvie Mill was the the largest individual flour miller in the world, with the Winnipeg facility being their largest. 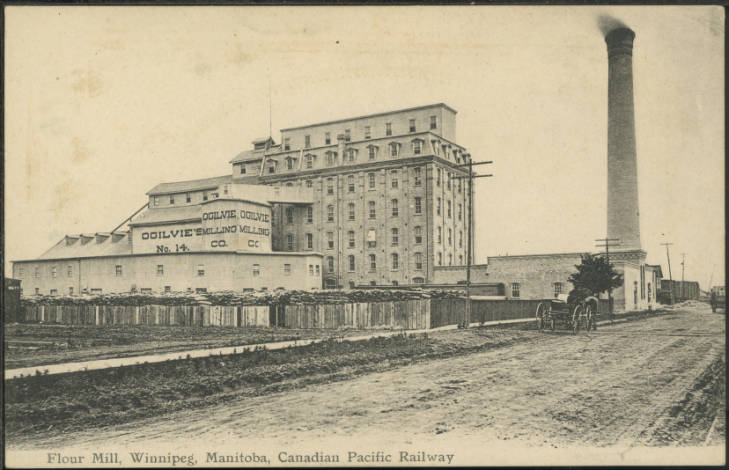 The Winnipeg mill even had a royal tour by the Duke and Duchess of York in 1901, in which the couple was thoroughly impressed. This allowed the Ogilvie Milling Company to receive a Royal Warrant from the Comptroller of the Household as “Flour Millers to His Royal Highness the Prince of Wales.” When the Duke of York became King George V in 1910, the appointment ended. However in 1912, a new warrant was issued and the mill became known as the “Purveyors of Flour to His Majesty,” an honour which the company held until December 11, 1939. Ogilvie’s used these royal warrants to their marketing advantage and labelled everything they made with the warrants. There was even memorabilia created that mostly seemed to have been free merchandise that was able to be claimed by purchasing flour. 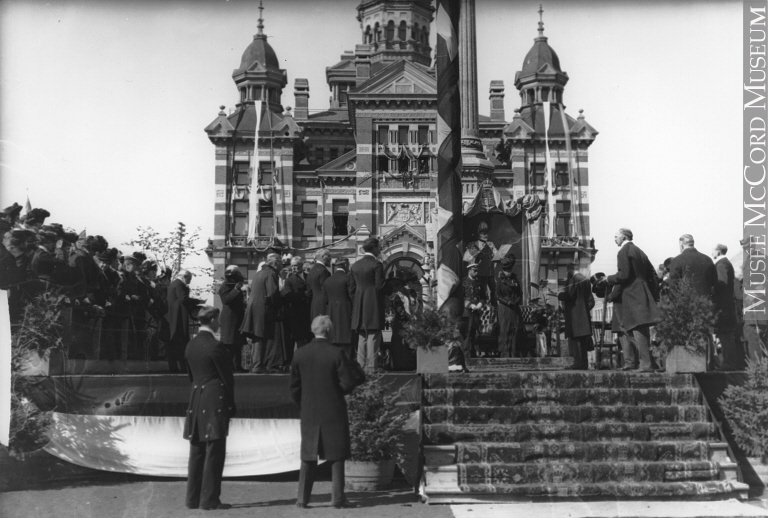 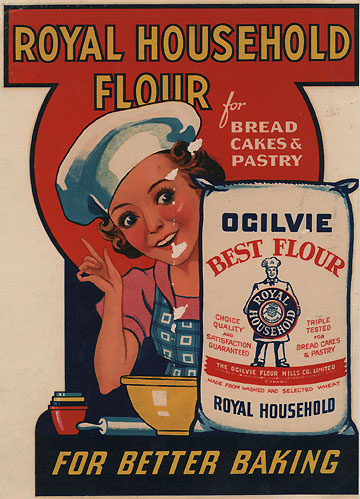 When passing by the building today, what stands out is “Five Roses Flour”, painted in enormous letters on two sides of the building. Five Roses flour was started by Lake of the Woods Milling Company based out of Keewatin, Ontario. Lake of the Woods Milling Company was bought out by Ogilvie in 1954. This allowed Ogilvie to use the name Five Roses, and it also removed some competition as Lake of the Woods  was a very large Canadian miller. The Five Roses cookbook is what many remember the company for and it was first published in 1913, and the most recent in 2009. These books were well loved and used by many. The early copies of the cookbook are incredibly valuable if in decent shape. 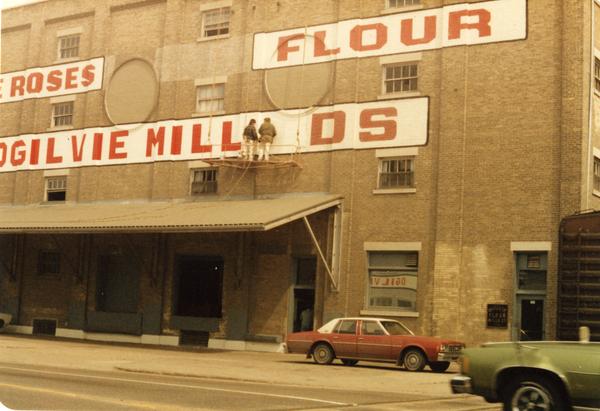 Painting of the exterior of the mill.
Source: University of Manitoba Archives

1989 was the final year for the Ogilvie Flour Mill. Roughly 90 people still worked there, a far cry from the couple of hundred that used to in its early days. Some of the blame was placed on a Canada-USA free trade agreement but most of it was simply due to time and circumstance. Winnipeg was now a large city and having such a large building in the middle of a city is not cheap. But most of the blame is likely due to the advancement of transportation. When the mill first opened, Winnipeg was the corridor between the east and the west, and into the USA. The building of the Panama Canal changed all of this and also the growth of planes and automobiles did not help. Ogilvie’s was sold to Labatt’s, making Labatt’s the owner of an empty building and the remainder of what was once a huge grain giant. 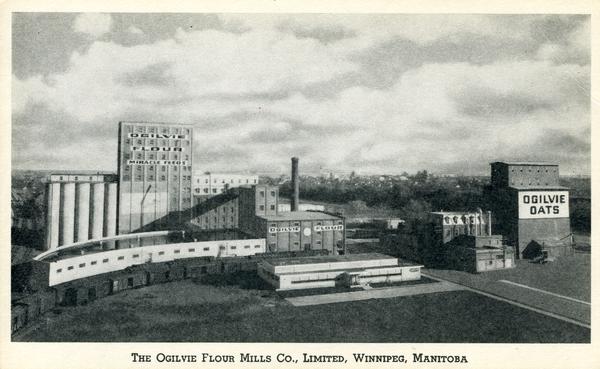 In the early 1990s, Robert Roehle and Don Borys saw great potential in the old mill. They wanted to turn it into a world class museum dedicated to Winnipeg’s role in the grain trade and production. It was estimated to cost $30 million and take 10 years to create. The museum was to be called “Renaissance on the Red” but that sadly never came to be. 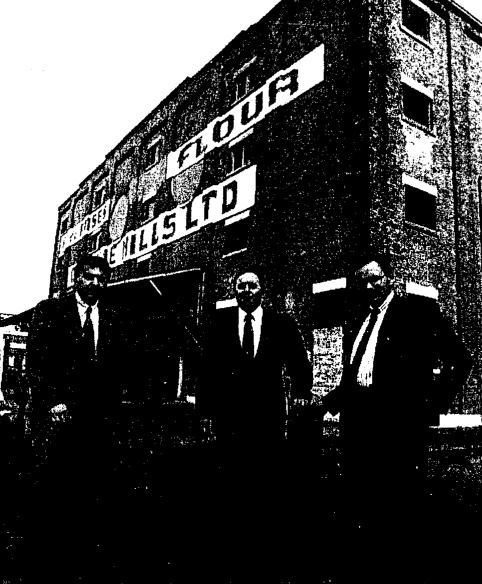 Don Borys, Alan Roberts, and Robert Roehle (left to right) in front of the flour mill they wished to save.
Source: Winnipeg Free Press -July 14, 1992, Page 20.

A fire in 1997 was the final straw and in 1999, the building was given over to the City of Winnipeg. Since so much of the historic building was gutted by fire and had been deemed structural unsound, the city chose to demolish most of the buildings on the site. The mill had lasted 124 years before meeting its end, in an epic explosion. 225kg of dynamite were used to take down the impressive 11 storey structure on August 21, 2005, shortly after 8am. Over a century of history was reduced to dust in only 25 seconds and according to reports, over 500 people came to witness the event. It took several more months to finish the demolition and to remove all the rubble. The entire demolition that started in June 2005 cost the city approximately $640,000.

Today, part of Ogilvie’s still remains on Higgins Avenue, which was once a storage building. It is not part of the original structure from the 1880s, but it still bears the title of it’s former owners. The building like many others in Winnipeg, is not protected by a heritage designation. Although the building itself may be nothing to remark on, it is the story that the building helps tell that is what is important. With the remaining mill gone to rubble, there is nothing left to tell this remarkable story that had a huge influence on the agricultural trade on the Canadian Prairies. Thankfully, the current owner of the building Don Borys of Border Glass & Aluminum has not covered up it’s history.  Allowing for those who are interested to pass by and wonder why was there a flour mill in the middle of a city, only to discover the important history and contribution to our city!

The remainder of what once was Ogilvie Flour Mill, seen here in May 2019.
Source: Google Maps

"A History of Flour Milling in Manitoba" | Karen Nicholson - Historic Resources Branch, May 1992.

One response to “With the Grain: A History of Ogilvie Flour Mill” 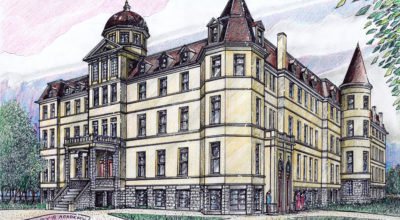 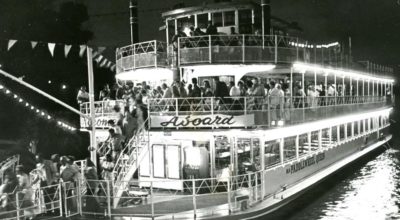 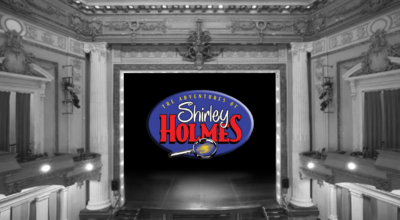 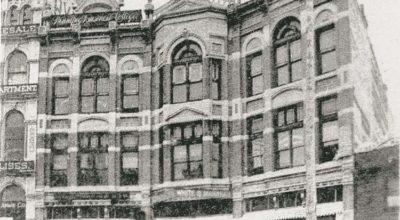 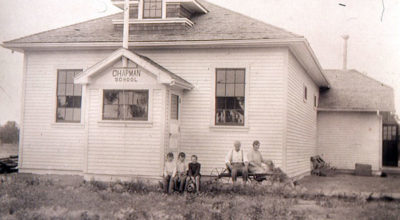