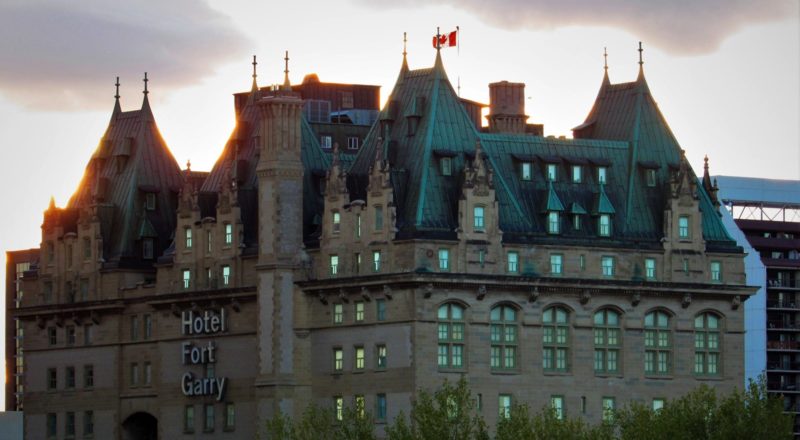 The Fort Garry Hotel, located at 222 Broadway, is one of the oldest hotels still standing in Winnipeg. The hotel, designed by architects George A. Ross and David H. MacFarlane between 1911-1913, is also a striking (and only!) example of the Château architectural style in the city. Built by the Grand Trunk Pacific Railway (which later merged into the Canadian National Railway), the hotel served as a luxury accommodation for elite railway travellers. A simple concept that added to the luxury was that each room had its own adjoining bathroom. While this is common today, back then that was an unusual addition.  The hotel officially opened to the public on December 10, 1913, with what the Manitoba Free Press called an “opening ball of great brilliancy”. The first overnight guests were welcomed the following day on December 12, 1913. 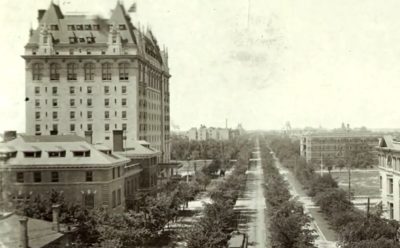 Originally the hotel was to be named “The Selkirk Hotel” as a homage to the Selkirk Settlers, who came from Scotland to live in the Red River Colony. But the name was changed to ‘The Fort Garry Hotel’ for unknown reasons. The hotel name comes from Upper Fort Garry, which acted as the Hudson’s Bay Company Headquarters until 1882. Following 1882, the majority of the land that Upper Fort Garry stood upon and was surrounded by was sold. Today, all that remains of Upper Fort Garry is the North Gate which is right next to the Fort Garry Hotel. The streets to the east and west of the Hotel also commemorate this fact as they are named Fort Street and Gary Street. 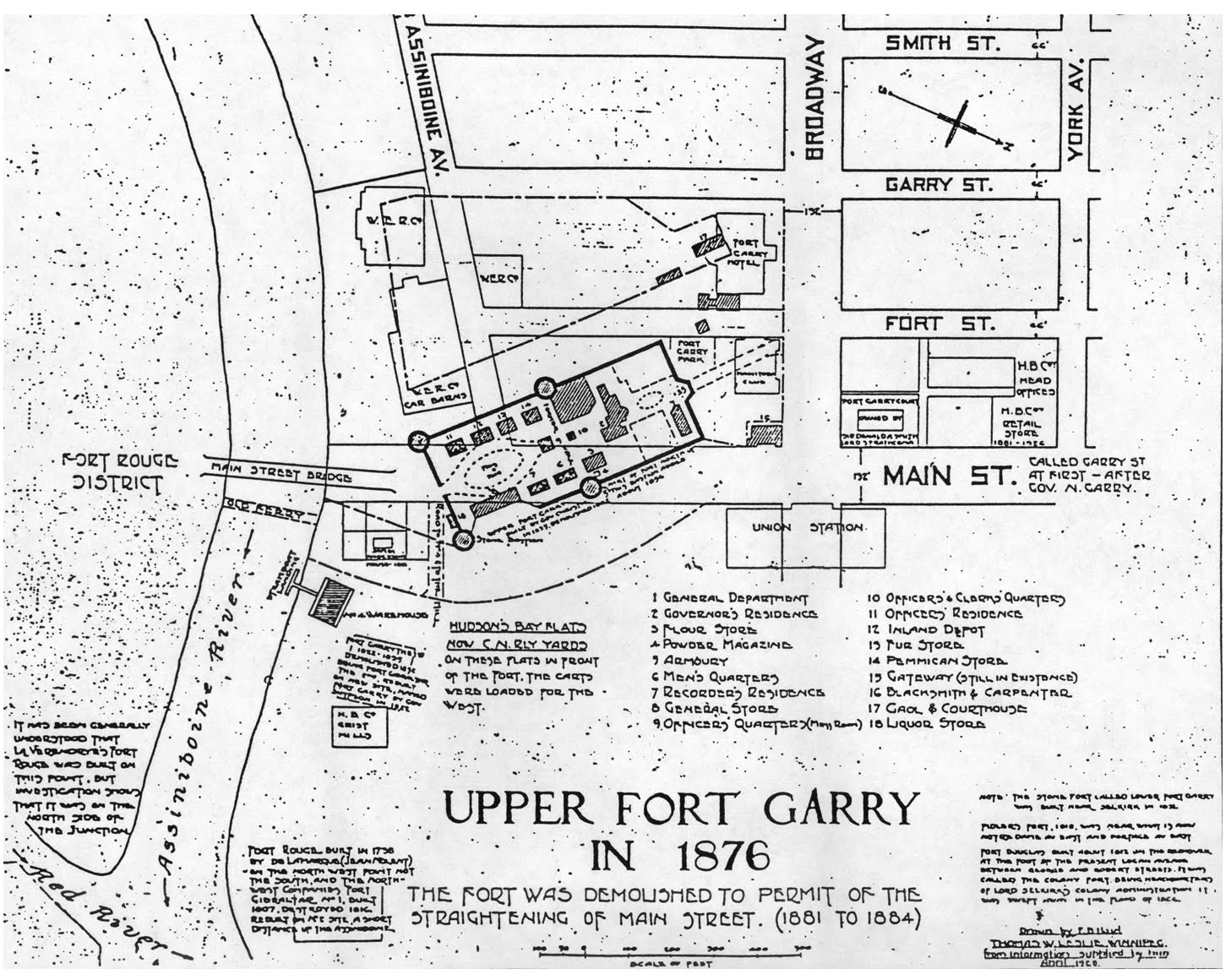 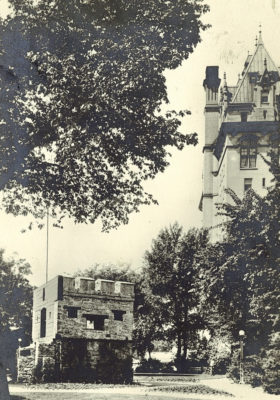 The building itself is modelled after the Château Laurier (now the Hotel Fairmont Château Laurier) located in Ottawa. The two hotels were built by the same architecture firm, Ross and Macdonald (then known as Ross and MacFarlane), “one of the largest and most prolific architectural offices in Canada prior to WWII” (Canadian Encyclopedia). The château style is an offshoot of neo-gothic, which has deemed unofficially as the architectural style of Canada. This style is common in hotels that were built for the railway, with examples found across Canada. The Fort Garry Hotel is Winnipeg’s only example of the Château architectural style. 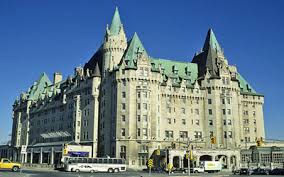 During the early days of the Fort Garry Hotel, it was one of the tallest buildings in Winnipeg. Located only a block away on Main Street, the building was easily visible to passengers arriving at Union Station. The 13 storey building, of which only 10 storeys are used, with its “steeply pitched, truncated hip roof, punctuated by multiple peaks, progressively smaller dormer windows, and finials; it’s imposing massing; its smooth-cut stone cladding; its elaborate decorative stonework” and the attic storey is surrounded by windows set in fanciful stonework crowned by Gothic finials.  All of this allowed it to stand out as the grand building it was. 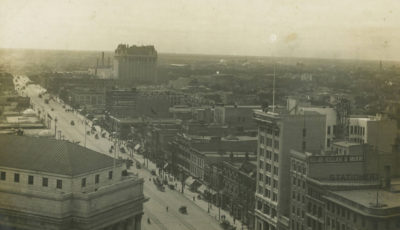 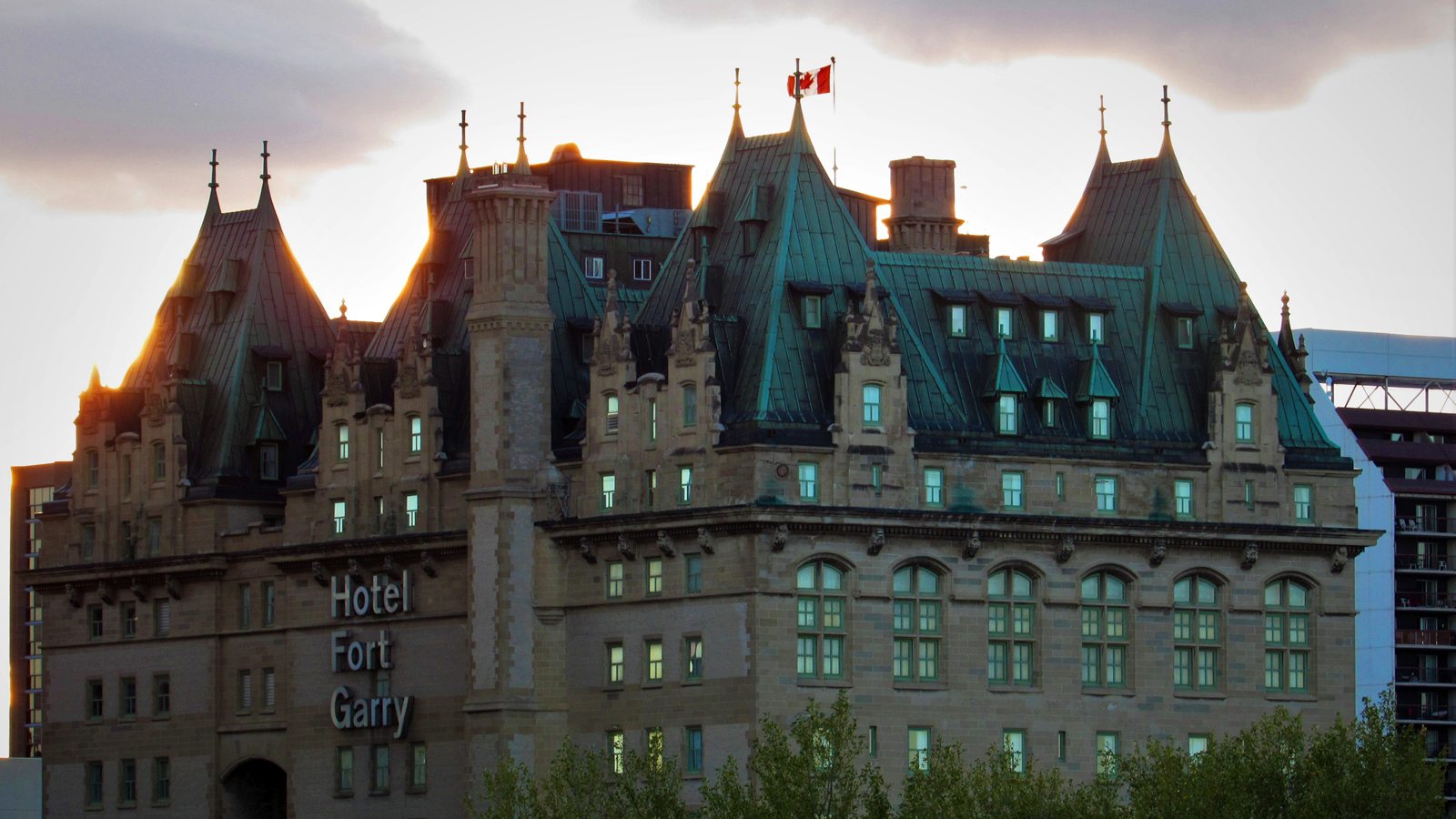 Due to its connection with the railway and Union Station, the Fort Garry Hotel had a “hotel hustler”, which was a horse-drawn buggy/carriage that transported guests between the hotel and Union Station. The Fort Garry Hotel had “a large coach, painted brown and gold and drawn by a pair of well-groomed horses.” Unlike other hotel hustlers, the men who drove it, “did not shout for the attention (of their guests as others did) but just stood there apart in quiet, elegant detachment”.  This only added to the elite status of the hotel. There is also an urban legend about a tunnel that connects Union Station to the Fort Garry Hotel (which is not true). Another Winnipeg hotel, the now demolished Royal Alexandra, had a tunnel connecting it to the Canadian Pacific Railway Station, which is where the legend likely stems from. 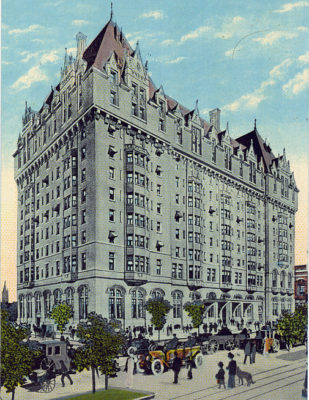 The ballrooms (the Crystal Ballroom and the Concert Hall) located on the 7th and 8th floor of the hotel have seen their share of change. These ballrooms were known for their opulence and grandeur. Both had intricate oak woodwork, decorative windows that allowed for views of Winnipeg, and large chandeliers. These ballrooms were the host of many parties and events, from balls to worker union dinners. The prestige of the hotel only added to the event, regardless of how prestigious the event was. For many people, events were the only way that they saw past the entrance of the hotel as staying at the hotel was beyond many of their budgets. 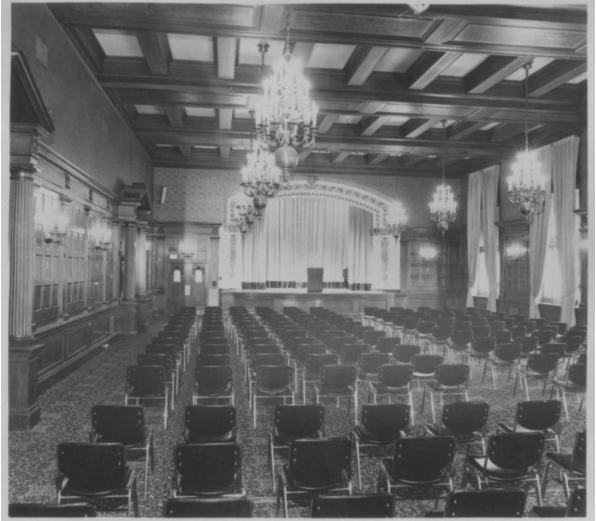 In the 1990s, the Hotel Fort Garry converted the two ballrooms into a provincial government-run casino, much to the dismay of many. It was known as the Crystal Casino with the name taken from one of the previous ballrooms. The Crystal Casino only operated for approximately 10 years, as the owners of the hotel were urging the government to remove it. Once again the rooms underwent extensive renovations to return the rooms to their former glory and grandeur and opened for parties and events in the early 2000s. 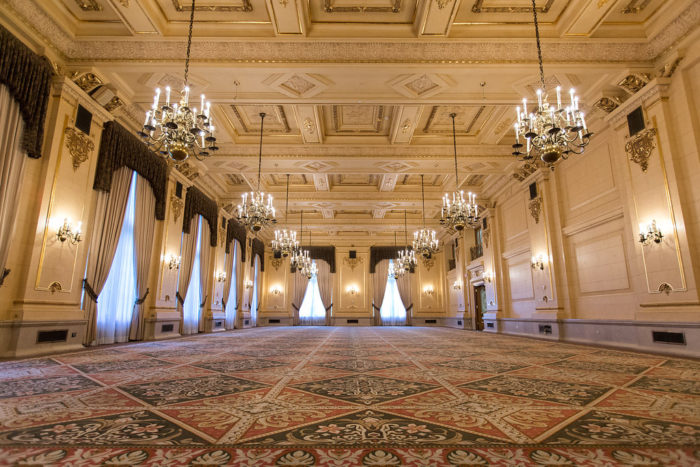 The Fort Garry Hotel has had an incredibly long-lasting streak of luck in regards to avoiding completely devastating incidents. There have only been two reported fires at the hotel that have caused any noteworthy damage. The first was on  June 11, 1954, that cause $2o in damage to the 12th floor. The fire on December 7, 1971 was much more devastating. The fire was contained to the 7th and 8th floors but there was smoke damage throughout the hotel. There were no casualties and very few minor injuries. All 95 guests of the hotel made it out safely, although one gentleman was forced onto a 7th story window ledge to escape the blaze. The fire caused over $1 million of damage but the hotel never closed its doors. 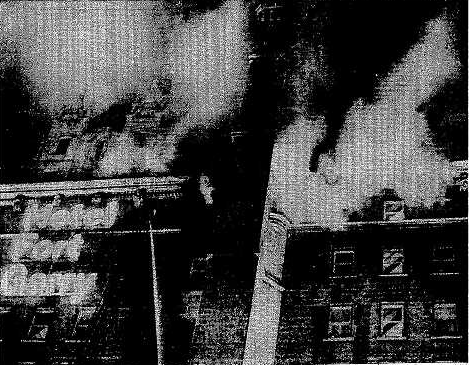 The closest the hotel came to closing its doors was in 1987. The hotel owed $2.5 million in taxes and was in urgent need of renovations to bring it up to modern-day standards. During this time the hotel was briefly owned by the City of Winnipeg. What was to be done with the building was a hot topic, some wanted it refinished, others repurposed, and a few even wanted it demolished. In early 1988, a Quebec company bought the hotel for $1 million with the promise of spending $12 million to renovate the 75-year-old hotel. The hotel reopened in mid-1988.

In the 107 years that the hotel has operated it has seen its fair share of famous guests. Musician such as Harry Belafonte, pianist Jörg (Joerge) Demus, hockey player Gordan Howe, Lester B. Pearson the 14th Prime Minister of Canada, and King George VI and his wife Queen Elizabeth who are the parents of the current reigning monarch Queen Elizabeth II. But arguably the Hotel’s most popular guest is one who never left. According to urban legend, room 202 is haunted by a female spirit. There is often a long list of people waiting to stay in this room as it is a popular room for those brave of heart. This spirit is not the only one tied to the Fort Garry Hotel, there are many more stories to be told. More can be learnt about the haunting here. 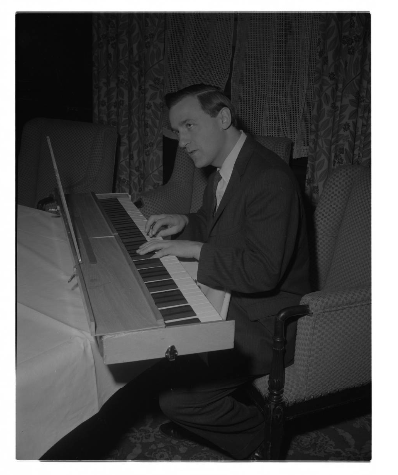 The building itself has visibly changed very little throughout time, although extensive renovations have been done over the years to allow for the changing times. Canadian National no longer owns the building and it is currently independently run. It is no longer one of the tallest buildings in Winnipeg and can only be seen if one is close to the hotel. Although, it still retains its prestige as an opulent hotel. Many of its architectural qualities still remain such as the roof, the oak panelling, the two-story dining (Frontenac) room, and the formal entrance with stone stairs, brass railings, and a copper-detailed canopy.  All of this has allowed the Fort Garry Hotel to be granted federal heritage status in 1980, and provincial and municipal in 1990. The building was recognized with a Heritage Winnipeg Conservation Award in 1989 and 2001. Robert “Bob” Horta was recognized with a Heritage Winnipeg Conservation Award in 2001 for the restoration of the 7th-floor ballroom in the hotel. Current owners Richard Bel and Ida Albo won a Heritage Winnipeg Distinguished Service Award in 2013. The year 2013, saw the 100th anniversary of the hotel. Heritage Winnipeg even created a video to celebrate the anniversary of the Fort Garry Hotel! 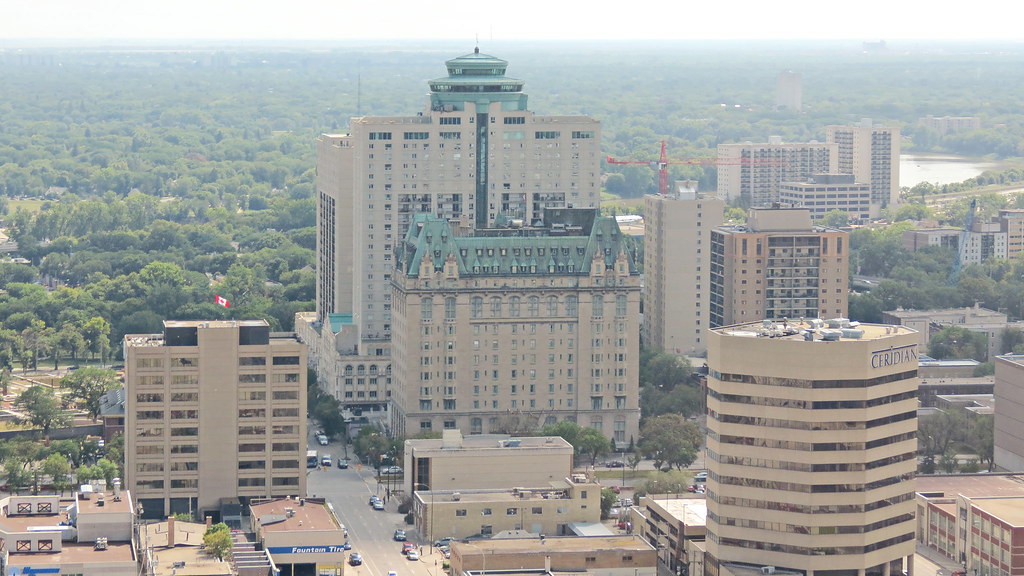 Over a century later the Fort Garry Hotel has persevered and is still a grand hotel! It is such a tangible connection to Winnipeg’s past and hopefully, it’s future. Just walking into the lobby brings the nostalgia of days gone by. It is a wonderful reminder of Winnipeg’s golden era when the railway brought people and wealth from across the world to our little prairie town. As the city around it has changed, the Fort Garry Hotel has continued to stand tall, weather all storms and staying true to its historic roots. This autumn Heritage Winnipeg is thrilled to once again be hosting its annual fundraising luncheon at the historic hotel. We invite you to join us for a wonderful occasion celebrating Manitoba 150 on Friday, October 23, 2020. This fundraiser is crucial in supporting the work of Heritage Winnipeg and will be a memorable occasion you will not want to miss. We cannot wait to see you there!

Written by Rheanna Costen on behalf of Heritage Winnipeg.
Edited by Cheryl Mann.

Read All About It: Reminiscences of an Immigrant Newsboy

One response to “A Canadian Castle: The Fort Garry Hotel”