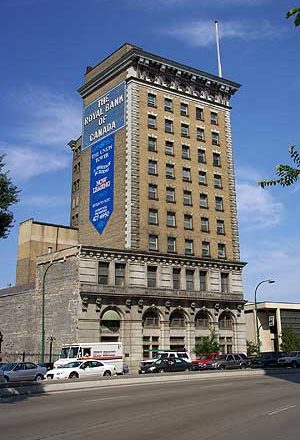 The former Union Bank Tower at 504 Main Street, and its associated Annex at 500 Main Street, now the home of Red River College’s culinary institute, was built in 1903-04 as the Union Bank headquarters. It is Western Canada’s first, and oldest surviving skyscraper, and is a federally (1997) and municipally (1995) designated heritage building.

The turn of the 20th century was undoubtedly a time of innovation and discovery. Arguably, nowhere in Canada embodied this positive energy and outlook more than Winnipeg. In a massive economic boom thanks to innovations in wheat hybridization and agricultural machinery, Winnipeg was a frenzy of activity in the period from 1896 – 1914, otherwise known as the Wheat Boom. Many of the city’s iconic buildings were constructed in this early period: the Fort Garry Hotel in 1913, the Pantages Playhouse in 1914, the Walker Theatre in 1907, the flatiron style Ambassador Apartments in 1907. But none of these buildings deserves the label “iconic” so much as the former Union Bank Tower and associated Annex at 500-504 Main Street.

The former Union Bank Tower was constructed in 1903 – 1904 using two new innovative methods of construction. Firstly, the building was constructed with a lightweight steel framework, as opposed to the earlier, and heavier, cast iron. Secondly, instead of having thick walls to support the weight of the building, walls were hung on the steel frame as a support – creating “curtain” walls. The combination of the steel frame and the curtain walls, allowed buildings to rise higher than they ever had before: at eleven storeys high, the former Union Bank Tower was the tallest building in Winnipeg when it was built. It was also the second tallest building in the British Empire at the time and held the title of tallest building in Canada for two years. It has now been argued that the combination of a high speed electric elevator, steel frames, curtain walls and a height of ten storeys or more are the defining elements of a modern skyscraper. The former Union Bank Tower had all these elements two years before any other building in Canada, which would therefore make it the first modern skyscraper in the nation!

Arriving in Winnipeg in 1904 when the building was newly completed must have been quite the sight. Designed in the Chicago style by Frank Darling and John Andrew Pearson, the impressive brick building dominated the landscape around it, dwarfing even the elaborate City Hall across the street. The lighter-coloured quoins and decorative window keystones create a rhythmic contrast in the midsection, while the lower section includes elegant arches and ornamentation. There were many buildings done in Chicago School style in Winnipeg at the time, notably the Confederation Life Building (1912), the Electric Railway Chambers (1913) and Paris Building (1915-17).

Upon hearing of the intention to demolish Canada’s first skyscraper, Heritage Winnipeg and other committed citizens took action: letters were written to Members of Parliament, Members of the Legislative Assembly, City Council Members, and to then-Mayor Susan Thompson. They argued against demolition and instead for revitalization and conservation of this essential heritage building, with cooperation from all levels of government. Efforts were successful and the former Union Bank Tower was given municipal heritage designation on July 18th, 1995, and federal designation followed two years later on September 22nd, 1997 (this historic building does not have a provincial heritage designation). The City of Winnipeg acquired the building in lieu of taxes in 1995, and in the following years the building was dreadfully neglected. Trying to find a proposal that the City would agree to proved difficult, and in 1999 some argued that the City was acting in bad faith by rejecting a proposal without any apparent reason.

After some repair work in 2001, a proper renovation for this historic building began in 2009, after the building had lain vacant for 17 years. The renovations, costing around $27 million dollars, were a collaboration between all levels of government: $9.5 M from the federal government, $4.5 M from the provincial government, $2 M from the City of Winnipeg and CentreVenture, as well as additional funds from the Winnipeg Foundation and Paterson GlobalFoods. In 2011, the renovations were complete, and Red River College had a beautifully restored and renovated heritage building for their culinary institute. Recognizing the outstanding effort put into conserving this historic building, Heritage Winnipeg awarded Paterson GlobalFoods Institute a conservation award at Heritage Winnipeg’s 2013 Annual Preservation Awards. The building has also taken part in Doors Open Winnipeg for several years, allowing the community to enjoy this heritage gem.

The Union Bank Tower, is not just Winnipeg’s first, but potentially Canada’s first skyscraper and has thankfully been preserved for years to come. But how much more of a loss might it have been, if its significance had only been discovered long after the proposed demolition? Pride in our historic buildings, while importantly tempered by historical fact, should be proclaimed loud and proud. Union Bank Tower, as part of Winnipeg’s Exchange District, is not only a landmark historic building as an early skyscraper, but may also be the first and oldest surviving skyscraper in Canada. Its position in Winnipeg as largely overlooked but should not come as a surprise – many do not realize how prominent Winnipeg was in North America during the boom years of the early 20th century. Allowing Union Bank Tower to come into its own as Canada’s first skyscraper may change that perception, and encourage Winnipeg to embrace that same optimistic spirit as we move into the future.