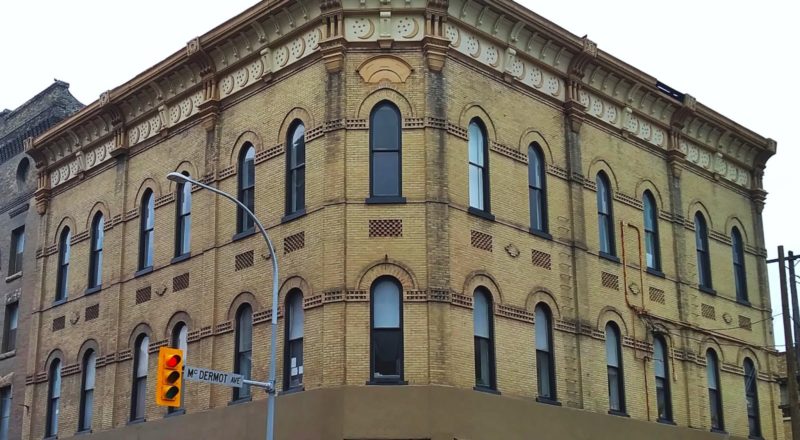 Winnipeg, as a growing city in the 1880’s, had just received the distinction – and boost – of being the through-point for the Canadian Pacific Railway in the province of Manitoba. More and more people came to settle in Winnipeg, following jobs, family, or adventure, and began to form groups, as people tend to do. Groups ranged from religious, ethnic to fraternal. One such groups was the Independent Order of Odd Fellows, with an admittedly interesting name, they had been established in the United States in 1819 as an import from Great Britain. The Odd Fellows had a reputation for being quite different that posh country clubs, considering that many if not most of its members were more middle than upper class, practical-minded family men. However, the Odd Fellows could still boast of some very prestigious men who were members: Charles Lindbergh the pilot, Charlie Chaplin the actor, and Wyatt Earp the lawman.

Although their exact origins are a mystery, the Independent Order of Odd Fellows’ first recorded meeting was in 1745 in England. Comprised of common labourers, the men pooled their resources to help one another and the wider community in times of hardship. The Odd Fellows arrived in Canada in 1843, opening the Prince of Wales Lodge No. 1 in Montreal, and spread to Manitoba by 1873. A non-sectarian and non-political organization, the Odds Fellows provide fellowship to their members while aspiring to do good in their communities. Their motto is “Friendship, Love and Truth” with an objective of improving and elevating the character of man. Secret rituals create an shroud of mystery around the order, with members never divulging what takes place behind closed doors.

The Independent Order of Odd Fellows (IOOF) Hall cannot really be called any particular style, since it is a truly eclectic mix of stylistic elements, resulting in a Romanesque Revival building that resembles the profile of the Italianate Fortune and Macdonald Blocks, while incorporating Classical and Victorian elements, and having a style all its own. Beginning with the intricate metal cornice, the status of the building is immediately established: the letters IOOFMLNo1 adorn the larger corbels of the building. These letters stand for Independent Order (of) Odd Fellows Manitoba Lodge Number One. If you look closely, you will also notice that each of the larger corbels have three small Corinthian columns. Underneath the columns is a small plinth and above is a detailed bracket supporting the cornice. Between each of the larger corbels there is a smaller corbel, without the tiny columns but still nicely detailed, and with a less ornate scrolled bracket above.

One of the most distinctive features of the IOOF Hall, however, is the mystic stars and moon symbols that occur between each large and small corbel around the building. Today these decorations, which are painted to look three-dimensional, are lightly coloured and stand out from the rest of the building. This interesting and unusual decoration is a nod to the fraternal order that occupied the building and the mystic lore surrounding it. Another unusual feature is the short stone arch above the top window on the canted corner facade. The canted corner, incidentally, is common in Baroque architecture.

Lower down, the third floor shows off windows with Gothic arches, decorated with a brickwork belt course that runs across the Princess Street and McDermot Avenue facades. Each window is topped with a raised brickwork label. On the second floor, the window shape changed from Gothic arch to Roman arch, but keeps the belt course and labels in the same styles. The windows on both floors have cut stone sills, and are separated by creative brickwork panels and raised diamonds. The panels, in particular, are reminiscent of the Fortune Block at 232 Main Street, which has similar decoration in between the Roman arched windows on the second floor.

Unfortunately, the first floor facade has been extensively remodeled, and no longer represents the original version of the building. The archival illustration below shows what the first floor may have looked like: it is clear there was some sort of corbelling with ornaments along the McDermot facade and the canted corner. Main floor windows were originally square and multi-paned, with more window space along the McDermot facade than the Princess facade, suggesting that the McDermot side was the “main” face of the building. Also interesting to note is the decorative brick courses along the windows on the second and third floors look quite a bit darker, as if they were once painted – and perhaps also the basement window wells.

This unusual and distinctive building was used as the administrative centre for Odd Fellow business for almost thirty years. In 1910, when the Odd Fellows Temple was built on Kennedy Street, administrative functions moved there. However, the Hall remained the headquarters for Manitoba Lodge No. 1 until the 1940s. The early 20th century was a grand time for the Odd Fellows, and their female sisterhood the Rebekahs, as a large convention was held in Winnipeg in 1912, complete with an iconic Portage Avenue parade:

Unfortunately, a fire damaged the interior of the Hall in the 1930s, and the building had to be gutted – with the exception of the third floor ballroom, incidentally the floor that the Odd Fellows operated on (the other floors were rented out for revenue). Mystical indeed! The architect R. F. Evans and the contractors Wallace and Aikens were hired to rebuild the interior. Over the years, the lower two levels were occupied by a number of different Winnipeg companies, including Carscaden & Peck (wholesale clothing), Ames Holden and Company (boots & shoes), Kingdon Printers, British Fur Manufacturing, and Empire Brass.

The Odd Fellows Hall has been an important meeting place for a fraternal order that still exists today, as well as the home for various commercial businesses, many of whom went on to construct their own buildings once they found success in Winnipeg. Throughout its history it has been a quiet source of charity, with members striving to improve their surrounding community and also being an important place of camaraderie for those who belonged to the organization. Today, the secret ceremonies and symbols contained within the walls of the hall remain a mystery to outsiders, but the building stands proudly for all to see, with the moon and the stars serenely watching over all who pass by.