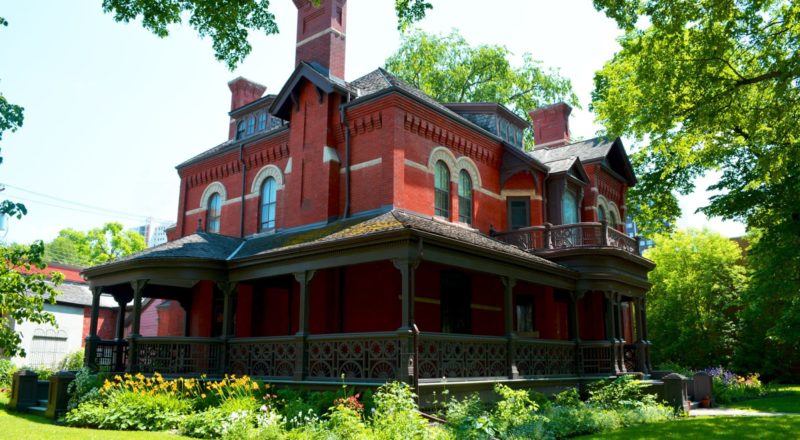 Step Back in Time at Dalnavert House

Earlier this summer, some of us at Heritage Winnipeg had the pleasure of visiting Dalnavert Museum and Visitor’s Centre at 61 Carlton Street to experience the wonders of a Victorian house. Truly a step back in time, Dalnavert exceeded expectations and is certainly one of the city’s heritage treasures. Whether you opt for the guided tour or the audio tour, this outstanding immersive experience will transport you back to a completely different era.

Dalnavert House was built in the late Victorian era in 1895, for Hugh John Macdonald, his second wife, Agnes Macdonald, and the children Isabella “Daisy” Macdonald (daughter with his first wife) and John Alexander “Jack” Macdonald. Although Hugh John was a prominent politician and lawyer in Winnipeg, he was often associated with his famous father John A. Macdonald. In one of the touching moments in the audio play, we learn that John A. Macdonald, statesman and Father of Confederation, had a soft spot for his highly unconventional granddaughter Daisy. Daisy, whose room includes a rapier as a nod to her love of fencing, was very independent and did not marry until the relatively ancient age (to the Victorians) of thirty-eight – and had an affinity for pistol shooting. The audio play, which we listened to for our tour, accomplished the highly unusual feat of making historical figures like Hugh John, Agnes, Daisy, and Jack – as well as the cook and maid – come alive.

The audio play is the stunning creation of Brock Capell, who organized actors in the roles of each member of the household while narrating historical information as you are guided from room to room. The theme for the audio play is the events of Wednesday, July 22, 1896 – where the Macdonalds went about their daily lives, the maid spills a large jar of pickles, and the Tuppers (Stuart and Ada) come around for dinner. The events of the day were carefully researched by Capell, and though we can’t know for certain all topics of conversation, no one can deny the high likelihood of young Jack begging his father to take him to the Expo (The Winnipeg Industrial Exhibition).

The tour begins in the summer kitchen, connected to the Visitor’s Centre with the help of two historic pillars salvaged from another heritage building in Winnipeg.  Although many features catch your eye, like the beautiful spindle details on the second floor, if you take the time to notice some of the smaller details and pieces you will not be disappointed. The curator, Alex Kroeger, who spoke with us after our walkthrough and says that she believes,

the most underrated part of Dalnavert is the collection.

The collection, though not original to the house (due to a large estate sale held after the death of Agnes Macdonald), is period-exact and as close as possible to the originals in many cases. The auction list served as a shopping list when furniture was being acquired! In the kitchen, one particular teacup caught the eye with its interesting addition a moustache guard, for the discerning gentleman who does not want to deal with the indignity of constantly mopping tea from his manly facial hair. It is easy to understand Kroeger’s appreciation after being through the house and noticing the endless small details – decorative door hinges, military brushes, beautiful clothes, and more.

The audio play guides you through the house, asking you to step into certain rooms and providing interesting facts that are seamlessly blended with the actors portraying household conversations. The dog, Dandy, makes multiple appearances; the cook visits the seamstress after the maid spills on her dress; and Agnes or “Gertie” cajoles Hugh John into attending lawn tennis even though he amusingly (and in a most relatable way) describes it as:

…just two people batting a ball back and forth! What a silly game.

It is monumental just how much work Mr. Capell has clearly put into presenting facts, tidbits, and characters in a way which works together so well, you might not notice if you did not have to write a blog about it later on.  Early on in the tour, flowers arrive in the kitchen, narrated by the capable cook and slightly hapless new maid, Millie. Later, when coming into the drawing room (following the Tuppers as they arrive for dinner), the narration mentions flowers again and how much Agnes “Gertie” Macdonald enjoying decorating with fresh flowers when she entertained visitors, which was often. Both Kroeger and Thomas McLeod (museum manager) cite the immersive experience at Dalnavert as a prime reason why people visit – and keep returning. For McLeod, the most overlooked features at Dalnavert are fantastic interiors, with elaborate wallpapers, and the gardens. The heritage gardens outside the house showcase species both indigenous to Manitoba and imported during the period that the Macdonalds would have been living at Dalnavert.

Gardens were in fact a characteristic feature of Victorian era houses, as a natural result of the plant collecting trend of the 19th century. Considered one of the great eras of gardening, Victorian gardens often had a mixture of native and exotic plants, arranged to show off each plant to best effect. In the gardens at Dalnavert are a beautiful mix of species, including lamb’s ear, hollyhocks, echinacea, poppies, and of course many ferns (which were much loved by the Victorians).


The four of us who experienced this fantastic audio play and tour are grateful to the staff and volunteers at Dalnavert for the incalculable amount of work and effort they have dedicated to this historic house. As heritage advocates, seeing one of our city’s heritage gems, be treasured in this way is gratifying, to say the least. We heartily recommend making a visit to Dalnavert House over the summer and enjoying learning about and experiencing a part of Winnipeg’s built heritage!

Dalnavert Museum and Visitor’s Centre is open this summer on the weekends from 10-4 and Wednesday to Friday 12-4. Admission is $6 for adults with discounts for children and seniors, and the audio play is $11. The verandah and heritage gardens are free to explore!