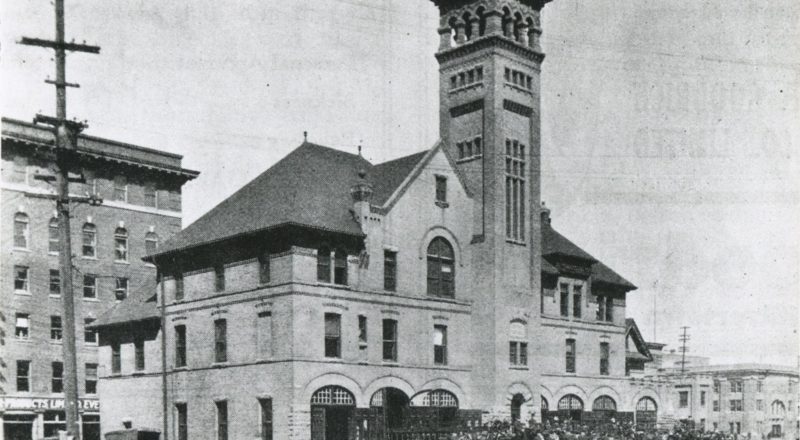 Planning with Purpose – Fire Hall No. 1

Cities faced many problems at the turn of the 20th century, one of the most persistent being the high risk of fires. Prior to the introduction of steel-framed structures in Winnipeg, our downtown warehouses and factories had interior support systems of wooden posts and beams. Combined with often lackluster heating systems, machinery prone to producing sparks, and workers smoking indoors, there were endless potential ways your building could go up in flames.


As such, Winnipeg had a busy and thriving fire department. Formed as a volunteer brigade in 1874, by the turn of the century they had moved to paid positions and increasingly auspicious headquarters. Their grand new central fire hall, Fire Hall No. 1, opened in 1899 at 110 Albert Street, an address now replaced with Old Market Square.

The Exchange District was a fitting place for this new location; the warehouses and factories being built nearby were at high risk for fires and the fire hall remained near the Red River, which was an invaluable source of water should the wells run dry. City Council approved the spending of $13,000 for the land at the corner of King Street and Bannatyne Avenue, and an additional $30,000 for the construction of the fire hall itself. Architect H.S. Griffith designed the building, and contractors S.B. Ritchie & Company were hired to carry out the plans.

Griffith’s design was an impressive blend of Romanesque Revival and Italianate architecture. When construction began in September of 1898, Fire Hall No. 1 was on track to become “one of the most striking as well as the most useful in all the long list of Winnipeg public buildings” (Morning Telegram, 1898-09-29, page 12).

Every modern convenience was made available, to ensure both comfort and a rapid response time to alarms. The main floor was divided into two halls with room for the horses, hoses and wagons. Prior to the introduction of motorized fire engines in 1910, horses were responsible for pulling all wagons to the source of the fire and, more importantly, staying calm throughout.

Above the garage and stables, on the second floor, were living quarters for the firemen. Ten, two-man bedrooms, could accommodate twenty men – and the fire chief had his own living quarters tucked away on the north side of the building. For recreation, the third floor functioned as a gymnasium.

Above all this was the tower, which held a gong. Once the fire alarm went off in the station, it would trigger the gong at the top of the tower – alerting the Winnipeg public to the danger.

In 1899, alerting the authorities of a fire wasn’t as easy as picking up a phone and dialing 911.

If you spotted a fire, to notify the fire department you would first have to locate one of their 49 call boxes. These boxes were hooked up to a telegraph system – once you pulled the lever inside the box, a signal would be sent along a wire to trigger an alarm in each fire hall. Each fire hall was fitted with an indicator showing which hall was nearest to the fire (Morning Telegram, 1901-06-29, page 9).

Their response time to these alarms was fast. Mrs. Roger Bamfield Cogan, visiting Winnipeg on a trip, reported in her diary that it took the men less than six seconds to be dressed and out the door once the alarm had been sounded! (Fire Fighting in Winnipeg, MHS) A good thing, too, as fires could (and often did) spread quickly.

One of the fastest spreading fires took place in 1904. Late in the evening of October 11th, two men noticed a fire in the basement of the Bulman Block on Albert Street. They signaled for the fire department from a call box immediately, but within ten minutes the entire building was up in flames.

Harsh winds took over from there, scattering the sparks across Albert Street and starting fires throughout the Exchange District. The sparks got far enough to reach the roof of Fire Hall No. 1, setting it ablaze twice that night; on both occasions a team of volunteer firemen and onlookers managed to stop the fire from spreading. Other buildings were not so lucky, and the fire cost an estimated $647,500 in property damages (roughly $18 million today). Still, only two buildings had been totally destroyed and the fire hall had been spared (Winnipeg Free Press 1904-10-12, page 1).

For decades to come, the Fire Hall No. 1 continued to act as the hub for fire-fighting operations in downtown Winnipeg.

By the 1960s, though, things had begun to change. In 1965 Fire Hall No. 1 was been relocated to its present-day location on Ellen Street (this would be Fire Hall No. 1’s fifth location in Winnipeg). This left the fire hall on Albert Street vacant, and its future entirely unclear. Admittedly, the building was outdated. Fire-fighting systems and strategies had changed drastically since the turn of the 20th century, and the old hall was equipped for horses and steam engines – not modern-day equipment.

In January of 1966, City Council voted to demolish the 1899 Fire Hall No. 1, spurring a rash of protests among Winnipeg students. 60 students from the University of Manitoba gathered together on March 28th at the site of the old fire hall. Their largest complaint was not the demolition of a 67-year-old building, but instead that the city was approving demolitions without plans for the vacant lots. The fire hall land was intended to be left for further civic development, but there was nothing specific in mind (Winnipeg Tribune, 1966-03-28, page 3).

The students finished their protest with a march towards City Hall demanding a meeting with the mayor. For his part, Mayor Stephen Juba was pleased with the discussion that took place and felt that “Winnipeg should be proud of it’s students”. Juba also agreed to work with the 60 students to come up with potential new plans (Winnipeg Tribune, 1966-03-28, page 3).

In response to the protests, City Council changed their plans. Fire Hall No. 1 was still to be demolished, but instead of leaving a vacant lot right in the heart of the Exchange District there was to be a temporary park until new urban development plans were made.

With a budget of $11,000, Old Market Square was created in 1967 – it’s namesake was the old Market Building that once stood just a block north, at the corner of William Avenue and King Street (Winnipeg Free Press May 25, 1966, page 4). It has become an iconic green space for gatherings and events, with a 360 degree view of the West Exchange District.

The creation of such new civic parks and municipal facilities paved the way for new downtown redevelopment, but at the cost of historic buildings and spaces that were significant markers of Winnipeg’s growth.