The Long Road to The Bay Downtown – Part One

The Bay downtown at 450 Portage Avenue was once one of the busiest, most popular department stores in Winnipeg. The store has scaled back dramatically over the years and there have been many discussions about how to best utilize this building, as each floor is slowly being vacated. Although architecturally, socially and culturally significant, this iconic heritage building does not have protected heritage status as of 2016. 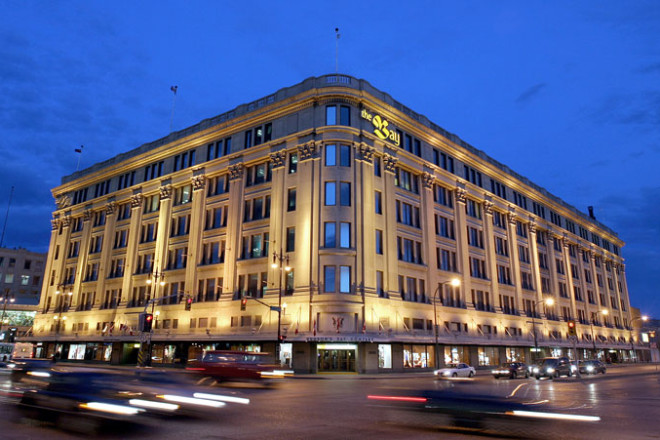 “The Company of Adventurers Trading into Hudson’s Bay,” or more commonly “The Hudson’s Bay Company,” or “HBC,” or “The Bay” is one of the oldest companies in the world.  It just passed its 346th birthday in May 2016. The company was officially formed on May 2, 1670. Their main base of operation was Upper Fort Garry, near the meeting of the Red and the Assiniboine Rivers. The Fort’s north gate still stands at the corner of Main Street and Broadway. 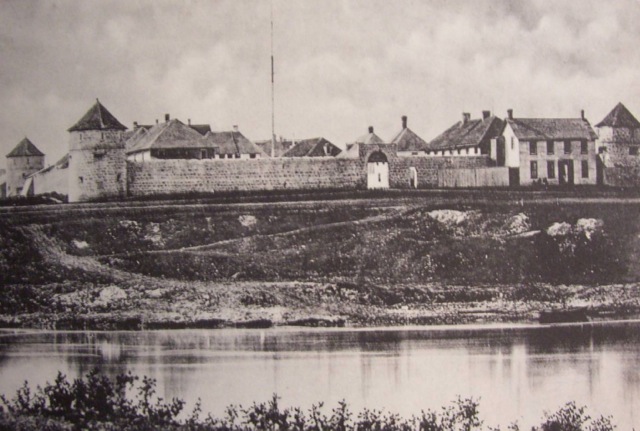 After the demolition Upper Fort Garry, the Hudson’s Bay Company moved its main operations in Winnipeg to a three story red brick building at the corner of Main Street and York Avenue.

Then something happened in 1905 that changed Winnipeg’s retail landscape­­ dramatically– Eaton’s Department Store opened their retail store at Portage Avenue and Donald Street. More retail followed Eaton’s, and much of it went up on Portage Avenue, which was fast becoming the retail hub in Winnipeg – and the Bay was missing out. By this time their Main Street and York Avenue location was considered “off the beaten track,” and HBC’s sales reflected this. In 1905, their sales were down 11.25% from the previous year.

There were talks among the Hudson’s Bay Company officials of expanding their building to better compete with Eaton’s, but HBC Commissioner Richard Burbidge staunchly insisted that there was no sense in upgrading their current building. He said what they really needed was to upgrade to a better location, as people were not suddenly going to want to make the trip to their store if they did not already. The company had to move to where their customers wanted to shop. Company officials eventually agreed, but they had a long road ahead of them. 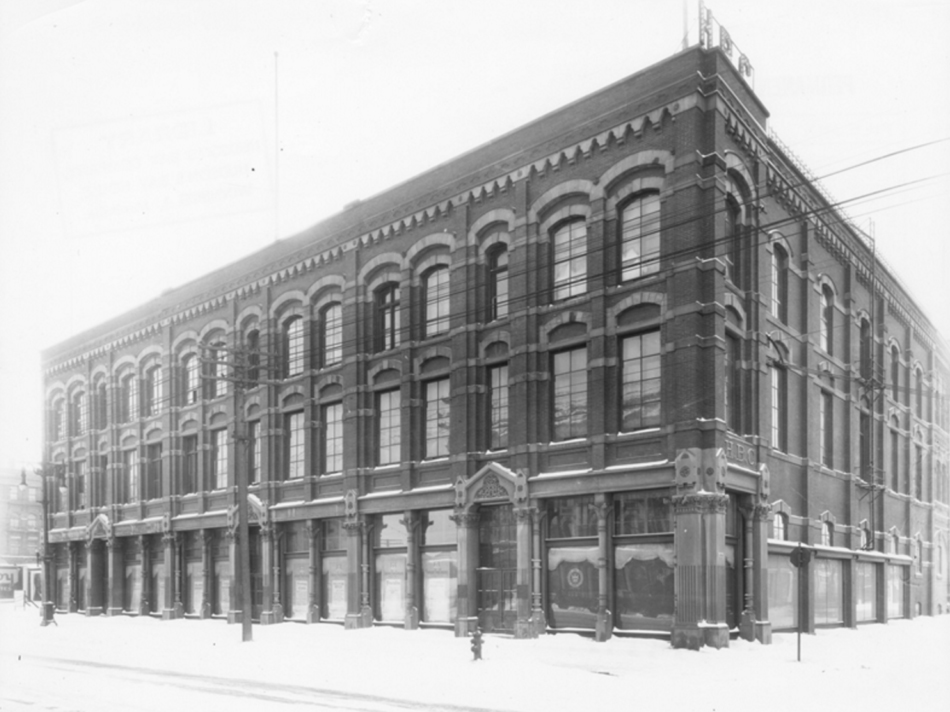 The HBC Store on the corner of Main Street and York Avenue.
Source: Archives of Manitoba

In 1910, Burbidge got permission to begin looking for a site for a new store. In 1911, Hudson’s Bay Company purchased 7 acres on Portage Avenue. Negotiations over the purchasing of the site were long and complex. In June of 1913, the Company announced they would build a 10-story skyscraper. By mid-September of 1913, no progress had been made on the project at all; a design for the store hadn’t even been picked. Unfortunately, this process went on for years.

By July 1917, Hudson’s Bay Company had plans to build a 12-story Renaissance Revival building complete with a Roman dome. Ultimately HBC officials rejected the plans, as they had stores in other Canadian cities and they wanted travellers to be able to look at an HBC store anywhere, and immediately be able to tell that the building was a Hudson’s Bay Store. The rejected Winnipeg store plans looked nothing like the new Vancouver or Victoria stores. 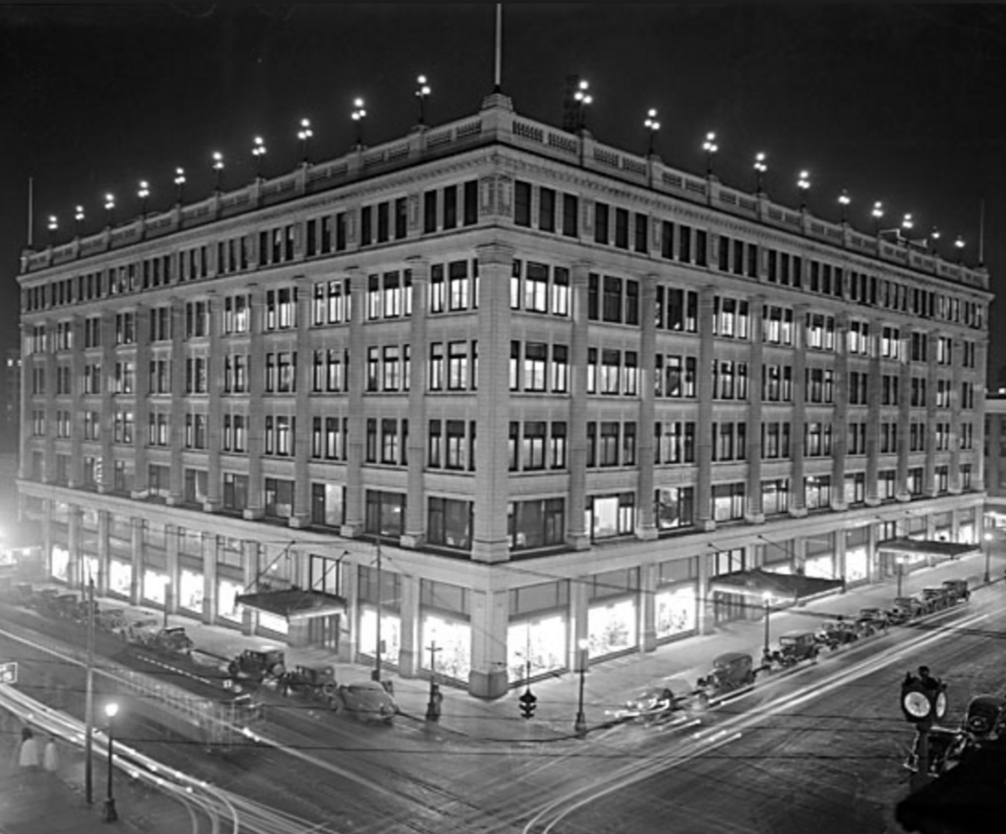 In 1918, a new plan for a 6-story building was approved. The Deputy Chairman of the Company, Edward Fitzgerald announced he wanted the new store built and operating by 1920 in celebration of the Hudson Bay Company’s 250th anniversary.

Once again, the project was delayed.

Newly proposed building projects surrounding the site threw a wrench into HBC’s plans, making their chosen site less than ideal. For years, they remained in talks with the city and other building owners in the area.  By 1923 people in the community were starting to view the vacant Hudson’s Bay Company lot as an urban wasteland. After all, the company had purchased it over a decade ago and done nothing with it. People just wanted to hear that there was some kind of plan, some kind of progress. Stakeholders within the company began advocating for the construction of a small, 2-story building on the lot. They said it would establish them in the area, and show people they were indeed moving forward. A.H. Doe of the company’s headquarters in London, England said there was no chance of that building going up. 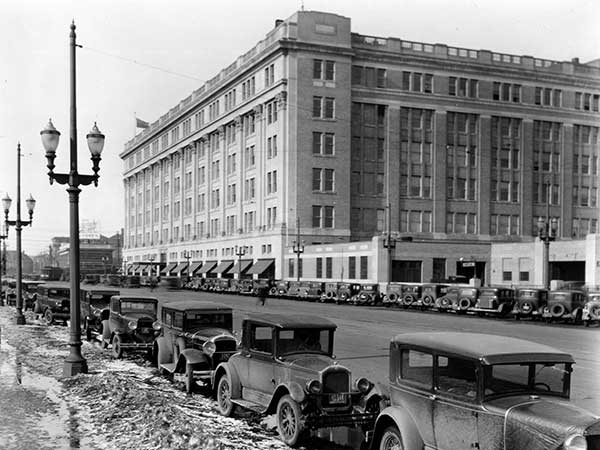 The Hudson’s Bay Building at 450 Portage after it’s eventual completion.

But just because that temporary 2-story building was not going up, did not mean the project was dead – it was finally about to get off the ground.

The Long Road to The Bay Downtown – Part Two

Written by Laura Wiens on behalf of Heritage Winnipeg.