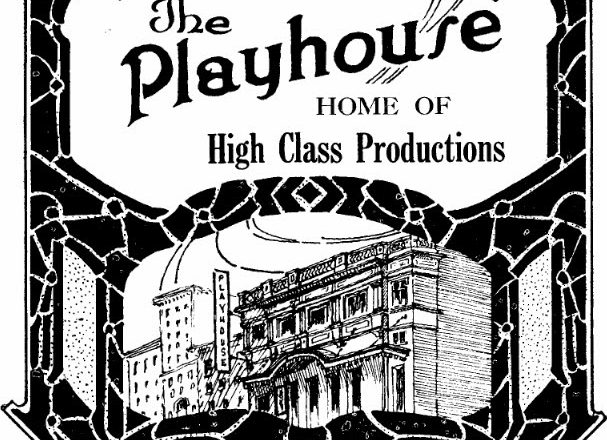 The Pantages Playhouse Theatre is one of of 75 theatres (today only six remain) built by Alexander Pantages in the early 20th century, and is the last-standing vaudeville theatre in Winnipeg. It is located at 180 Market Avenue east in the heart of the East Exchange District. It is a municipally (1981), provincially (2004), and federally (1985) designated heritage building.

Picture this – Winnipeg, in the early years of the 20th century, buoyed by the prosperous grain farmers on the surrounding prairies, the city is in its prime. After the bustling workday is through, Winnipeggers had their choice of evening entertainment at the many different theatres the city had to offer. Elegant productions were shown at places like the Walker Theatre (now the Burton Cummings) or those inclined could choose more lively variety shows – Vaudeville. There were a number of dedicated vaudeville theatres in Winnipeg: the Dominion Theatre, the Bijou Theatre, and the Orpheum Theatre, but only one remains today: Pantages Playhouse Theatre.

The Pantages Playhouse Theatre was built in 1914 in the Classical Revival style, which became known as “Pantages Greek”, after Alexander Pantages, the owner of the chain of theatres across North America. The building was designed by B. Marcus Priteca (who designed many Pantages theatres), and overseen locally by architect George Northwood, whose credits include the Pavilion in Assiniboine Park, the Women’s Tribute Memorial Lodge, and the Medical Arts building. In a time of Baroque-level extravagance in theatre design, the Pantages was just restrained enough to remain tasteful while still leaving theatre-goers marveling as they walked under the lit-up marquise, through the high-ceilinged lobby, and into the elaborate theatre with its grand proscenium arch. Although construction wasn’t just decorative – Pantages Playhouse was also the first building of its size to be built with a reinforced concrete frame. Reinforced concrete was a revolution in building methods, allowing larger, taller, lighter buildings to be constructed across the world.

Pantages Theatre hosted some shows with familiar names, like Stan Laurel (later of Laurel & Hardy), as well as Buster Keaton (in his first vaudeville show with his parents) – and some less familiar but exciting acts like Felix, the Mind-Reading Duck. After all, Pantages Playhouse advertised itself as “Unequalled Vaudeville”, going to far as to have it carved into stone on the north facade of the building. Alexander Pantages’ theatres formed a circuit all across North America, and acts would tour all of these theatres – but often started in Winnipeg first. Their success or failure in the crucible of Manitoba’s capital would often determine their success or failure in other venues on the road. Not only the centre of Canada and the Gateway to the West, Winnipeg was the centre of the Pantages Vaudeville world.

Sadly, the days of Vaudeville Theatre with their weird and wonderful performers were coming to an end. The advent of “moving picture” theatres (such as the Uptown Theatre), that had cheap prices and the novelty factor, beat out the old Vaudeville venues for the nickels and dimes of Winnipeggers. On June 23, 1923, Pantages Unequalled Vaudeville closed, to reopen later that year as the Playhouse Theatre. However, the theatre still boasted some of the most unequalled entertainment in the city, even if it wasn’t vaudeville. After the City of Winnipeg acquired in a tax sale in the 1930’s due to the Depression and lack of revenue, the Playhouse Theatre became the home venue for the newly formed (in 1939) Royal Winnipeg Ballet, now the longest continually operating ballet company in North America. Throughout the next couple decades, the Playhouse Theatre continued to draw in crowds with playbills featuring names like Laurence Olivier and Ella Fitzgerald – of course, undergoing an $80,000 renovation in 1954 didn’t hurt either.

In the early 1980’s, the Playhouse Theatre received its first heritage designation, municipally, on January 5th, 1981. Soon after a $300,000 renovation in 1985, it also received designation as a national historic site on November 15th of that same year, as well as an Institutional Conservation Award in 1986 from Heritage Winnipeg. In the late 1980’s, concerns over the size of the lobby space led to an extensive restoration and addition, to the tune of $3.6 million dollars, completed in the early 1990’s. Although both municipal and federal designations came in the 1980’s, provincial heritage designation did not come until October 1st, 2004.

Soon after the restoration and addition were finished, in 1994, there were calls for the City of Winnipeg to sell the Playhouse Theatre. The push to move away from city ownership is rooted in a few different issues. The city acting as a landlord for the building is problematic, as they can dedicate neither the time nor the money required to fully optimize the potential of the building, and it’s no secret that the Pantages has been operating at a net loss for a while. Furthermore, the city bureaucracy exists primarily to provide services and government for the city, not to turn a profit as landlords. What might be a good solution for this historic theatre is to be sold and for the owners to enter into an agreement, with one or more non-profit sector partners to manage, maintain, and operate the building.

From 1994, the City of Winnipeg has called for proposals from private sector and non-profit groups for purchasing and using the Pantages Playhouse Theatre a number of times. In 2005, 2010, 2013, and now in 2018, the city has been attempting to sell the theatre but to no avail. However, this time around something may be different – True North Sports and Entertainment have successfully taken over operating the Burton Cummings Theatre (previously the Walker Theatre and the Odeon Theatre) in 2013, buying it from the city in 2016. This example of private operating and then ownership shows that historic venues can often be profitable for private companies, and may encourage proposals for the Pantages Playhouse Theatre. The City of Winnipeg has stated that financial concerns are not the most important thing they are considering in this request for proposals (RFP). In fact, the RFP states that the price and financial terms will only make up 20% of the evaluation criteria.

Despite the disappointments of the past RFPs, Heritage Winnipeg remains hopeful that a solution will be found for the continued operation and conservation of one of our city’s most iconic built heritage and cultural landmarks, with an immense connection to our city’s history. The Pantages Playhouse Theatre is a unique surviving remnant of Winnipeg’s boomtown era, and of the vaudeville era as well.

The Request for Proposals is open until August 31, 2018. Show your support for the Pantages Theatre by sharing your experiences!Let us know – when was the last time you were at our “unequalled” historic theatre?