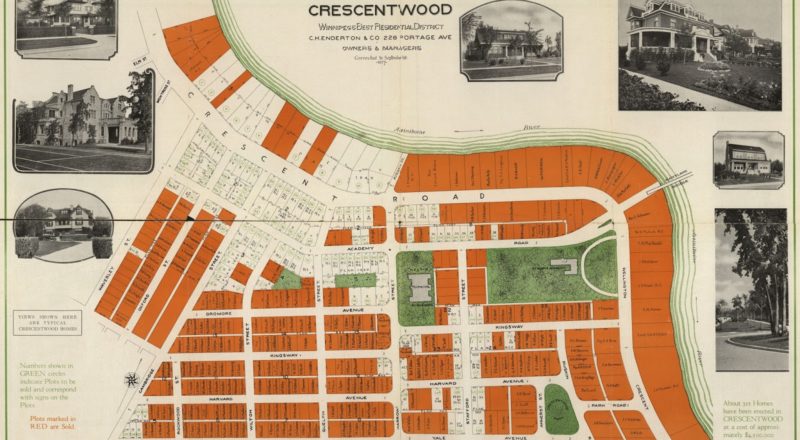 In the late 19th century, the City of Winnipeg was rapidly expanding. Previously residential areas were being turned over to accommodate the growth of the downtown area, which was bustling. The opening of the grain exchange in 1881, and the national railway connection in 1882, meant that there was suddenly a lot more business in Winnipeg than there had been before. With all this change in the downtown area, people began looking for a somewhat quieter place to call home.

Comparisons are odious and perhaps it is not well to call attention to the occupancy of some of the thoroughfares which were considered Winnipeg’s finest streets some 6 – 10 years ago…(they are) central and built up, they have begun to deteriorate

The area south of the Assiniboine River was the answer. Although a few wealthy businessmen had built their homes by the river in the late 1880s, the area was still very much out of the way for many people. The construction of the Main Street Bridge in 1880, followed crucially by the Maryland Bridge in 1894, transformed the area south of the river from a wooded forest with a few homes to what one map would call “Winnipeg’s Best Residential District”.

As for the name Crescentwood, after the real estate mogul C.H. Enderton had purchased the large area for development, he asked railway lawyer J.H. Munson, whose home was built in 1889 on what is now Munson Park, if Enderton could name his new development after Munson’s house. Munson had named his house “Crescentwood”, likely in homage to the winding river trail along the Assiniboine.

Originally, the area that is now Crescentwood was known as “St. Boniface West” and consisted of long, narrow lots, bordering on the river in the French Canadian style:


One of the first buildings to be built in Crescentwood in the new century was St. Mary’s Academy – having outgrown its previous location on Notre Dame East, the Sisters were looking for a large lot on which to build their new academy, with lots of room for growth. They found exactly what they were looking for, south of the river, and construction of the new academy began in 1901 on the 15-acre site. Designed by English architect Samuel Hooper, the stately 1903 building and its 1909-1910 addition use Second Empire architectural features, including the distinctive Mansard roof and peaked dormers.

The St. Mary’s Academy construction kicked off a frenzy of house-building in the new Crescentwood district, billed by Enderton as the neighbourhood of Winnipeg’s elites. To encourage this concept, Enderton worked with the City of Winnipeg to impose a caveat, which placed restraints on the building lots in Crescentwood, to ensure that the area would develop with large homes on large lots. Winnipeg’s wealthy and prosperous, who had occupied the Point Douglas and Armstrong’s Point areas, began to move into Crescentwood.

As we can see on the map above, construction of Crescentwood homes for the rich and famous began in 1905, notwithstanding a few previous homes, such as Munson House (demolished, built 1889), Dyson House (built 1898, now the site of Shaarey Zedek Synagogue), as well as James Richardson’s house (built 1889). Between 1905 and 1911, more than a hundred new homes were built in the Crescentwood area, for distinguished personages like Jack Borebank, promising real estate agent who sank with the Titanic; John Draper Perrin, mining giant and entrepreneur; Elisha F. Hutchings, president of various saddlery, loan, and brick companies; and George Galt, a tea importer who once hosted Edward, Prince of Wales, in 1924.

By 1917, most of the lots that Enderton had created had been sold, making the dream of Crescentwood a more concrete reality, albeit one built with limestone, brick, and oak. Enderton had also begun to circulate “Views in Crescentwood” to promote the sale of remaining properties:


The City Beautiful movement valued architectural harmony and unified design – the development of Crescentwood, with its large standardized lots and building caveats, public park spaces and in general the ideal of civic beauty as opposed to civic function, is typical of this concept. The “Views in Crescentwood”, as well as the 1917 map, both show large, sprawling properties framed by greenery and landscaped lawns. Having the houses set back from the street allowed for construction of sidewalks with boulevards, so people could stroll along and appreciate the beauty of the neighbourhood. Probably the most obvious result of the City Beautiful movement in Winnipeg, though, is Assiniboine Park – see our previous post here for more information.

Every house erected will improve the district. No more than one house to a sixty-foot lot. Not on account of the high value of the houses but on account of their placing the whole addition will look like a park when built up

Today, Crescentwood retains much of its historical character. Grand old houses built a century ago still stand on large leafy lots, hankering back to a luxurious bygone era. Due to the intact nature of this historic neighbourhood, Crescentwood is an excellent candidate for the City of Winnipeg’s new Heritage Conservation District by-law, which came into effect in September of 2018. The designation is designed to “conserve an area’s special and distinct heritage attributes; provide design direction for growth and change; enhance community identity, pride and involvement; convey a sense of place; leave a legacy for future generations.” As the community had expressed an interest in pursuing designation, Heritage Winnipeg has been diligently working with them for the past two years on the project. Hopefully Crescentwood will be the next neighbourhood designated, conserving “Winnipeg’s Best Residential District” for years to come!

Interested in learning more about the houses of Crescentwood?
Read our other great blogs!

Written by Natassja Brien and Cheryl Mann for Heritage Winnipeg