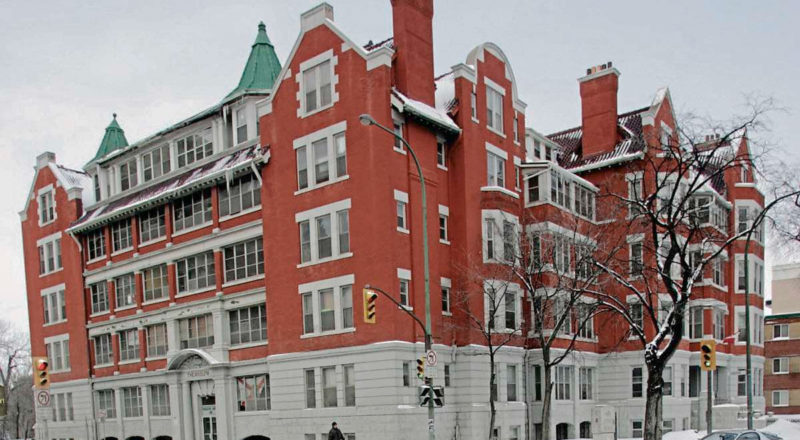 The Roslyn Court Apartments at 40 Osborne Street are a premier example of the Queen Anne Revival style, which was rarely used for apartment building. It is a neighbourhood landmark, with an eccentric facade dominating the corner of Osborne Street and Roslyn Road. Frozen in time with a nearly original 1909 interior, the luxury suites were once home to Winnipeg’s elite. Today the building’s bizarre, maze like design perplexes visitors and adds to a feeling of unease, further heighten by tales of shadowy figures that roam the halls. It is a beautiful and mysterious place, which brave Winnipegger’s still call home today.

In 1882 land speculators built the Osborne Street Bridge across the Assiniboine River, connecting the downtown with the less developed area then known as St. Boniface West (now the River-Osborne neighbourhood). The quaint, rural setting of St. Boniface West was conveniently located near the city, making it attractive to Winnipeg’s elite, who started building grand homes in the area. After nearly two decades of such development, a new form of housing was starting to be built in the area, the apartment block. These buildings were not the compact, economical form of housing found in high rises today. They were generous suites in low rise buildings with rich finishes, designed to house affluent members of society.

Dr. Richard J. Mattice embraced the new trend, and in 1909 embarked on building a five storey apartment block at the north west corner of Osborne Street and Roslyn Road, prominently located just across the river from the Manitoba Legislative Building. Mattice hired Irish architect William Wallace Blair to design the building, who had just recently designed the Princeton Apartments (312 Broadway) and the Warwick Apartments (366 Qu’Appelle Avenue). No expense was spared in the building of the apartments, making it one of the largest, most expensive (costing $205,000 to build) and luxurious of its time.

In a period when restrained neoclassical architecture was popular, Mattice’s design went in the complete opposite direction. Bold Queen Anne Revival facades facing Osborne Street and Roslyn Road are composed of grey stone at the ground level, red brick with stone accents above and capped by a quirky roof line with red and green tiles. The Osborne Street facade features a main entrance and what appears to be nearly an entire wall of verandas, which were originally open walkways used as service corridors for the corner suites. The Roslyn Road facade is an asymmetrical step design, with the angles exaggerated by bay windows. This facade also features a main entrance, styled completely different from the other entrance. The endless sets of windows on these two facades are surrounded by stone, which is also used to accent the roof line, composed of stepped gables, turrets, shed dormers, gables, arches and chimneys. The two remaining facades of the building are rather bland in comparison, monochrome in colour with consistent window placements and uneventful roof lines.

Due to building code at the time of construction, the building is made of costly stone and concrete – buildings over three storeys were required to by fireproof – providing for a relatively soundproof interior. Building code also stipulated the amount of light and ventilation require for each unit, which resulted in light wells with stained glass and an “L” shaped interior courtyard. As Blair designed each unit to have its own exterior entrance, covered walkways crisscross the courtyard walls to provide access.

Walking into the building, marble and dark woodwork abound. The original copper cage elevator still carries residents to their suites (originally 26 two or three bedroom and 10 bachelor suites). The insistence on exterior exits for all suits resulted in some long hallways and strangely shaped rooms. The layout of the suites are made even more odd by the presents of small bedrooms for domestic staff and service staircases, both located off some of the kitchens. Generous suits (some over 2,200 square feet!) feature formal dining rooms, fireplaces, ceiling beams, ornate plaster and woodwork, wood paneling and floors, and pocket doors, all relatively unchanged since the building opened in 1909.

Over time a parade of well known Winnipegger’s have called Roslyn
Court home, including doctors, professors, politicians, business owners
and military leaders. Everyone from Lady Macdonald (widow of Sir Hugh John Macdonald) to Minnie J.B. Campbell (the only Canadian woman awarded
the Golden Cross of Merit by Poland) to Dr. Olive Cole (one of the
first woman dentists in Winnipeg) lived at Roslyn Court. And it would
seem that some of these tenants never left…

Recent
tenants of the buildings have encountered an exceptionally tall, dark
figure stomping through the hallways and scaring them out of the laundry
room. Despite the fine finishes of the interior, the maze of hallways
and walkways leave people feeling disorientated and unsettled. This has
led to the rumours that the architect, Blair, was going mad, which was
expressed in his labyrinth-like design. Perhaps it is his restless
spirit that still roams the hallways?

For those brave enough to enter and take up residence, the Roslyn Court Apartments are a true heritage gem to immerse oneself in. Both municipally and nationally designated, the building captures the spirit of the Winnipeg’s growth and prosperity at the start of the 20th century. Rich with history and ornate original details, Winnipeg is fortunate to have such an outstanding example of Queen Anne Revival architecture. A puzzling maze of corridors and particular rooms, it is a truly spectacular building, so much so that it would seem some tenants choose to stay for all eternity!

Blog by Cheryl Mann on behalf of Heritage Winnipeg

One response to “Blair’s Labyrinth – The Roslyn Court Apartments”