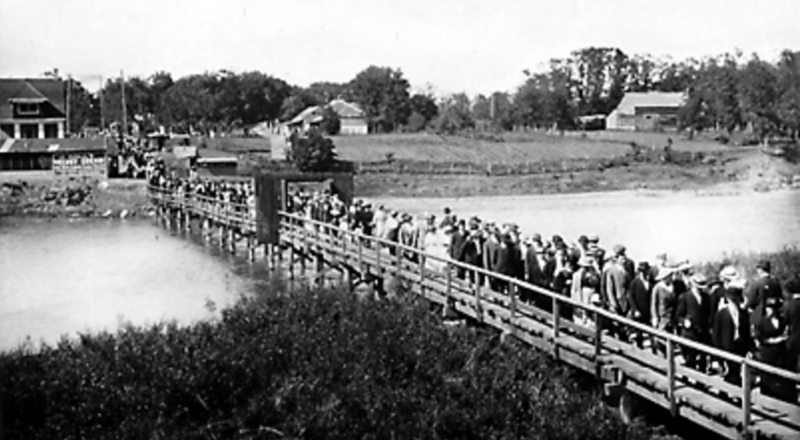 Our Own English Garden: Assiniboine Park

Assiniboine is a large, popular park in Winnipeg. If you visited Assiniboine Park over the summer of 2016, you likely saw large groups of people playing the game Pokémon Go. The Pokémon Go craze may have inspired a large surge in visitation to the park, but it’s always been a popular place for Winnipeggers.

The idea for Assiniboine Park came up in 1893, when the first parks board of Winnipeg was created. They wanted to create a large park in Winnipeg, based off English parks.

The board purchased 283 acres of land along the Assiniboine River. They decided they would house the city’s zoo in this park, and also had other ideas for what they would do with the space.

The first pavilion was built in 1908. Assiniboine Park didn’t officially opened in 1909, but people were using the park and pavilion before that. Winnipeg architect John S. Atchison designed the original pavilion, and it cost $19,000 to build. The City of Winnipeg Historical Buildings Committee describes it as “ornamental and visually striking,” and it was only intended for summer use.

The pavilion was broad and sweeping with lots of windows and partially enclosed loggias. There was a 90-foot tower which was visible above the park’s trees, and within the tower there was a massive water tank that and pump for the water system that carried water to the park from the river.

The pavilion had a dance hall, a banquet hall, and catering facilities. The pavilion was very popular with the public, and it’s facilities meant it was also frequently used as a meeting place for official city functions. The park and the zoo were expanding quickly, and the pavilion needed to meet higher demands than ever. Despite its popularity, other parts of the park received the majority of the available funding, and by 1925 the pavilion had fallen into disrepair. It had major structural problems, and there was no funding for the pavilion for anything beyond minor repairs.

It seemed like the pavilion was doomed to deteriorate more as time went by, but it was spared a slow demise. On May 27, 1929, the pavilion burned to the ground in what is described as “a violent early morning fire.” The building was completely destroyed, but the vine covered walkways escaped the blaze, and even the fish in the pond were unscathed. The day after the fire the Parks Board held an emergency meeting and unanimously approved the construction of a new pavilion.

The new pavilion opened one year later, on May 30, 1930. The new pavilion is significantly larger than the original, but mimics its shape, and cost $96,000 to build. The architects Northwood and Chivers also designed several other prominent Winnipeg buildings including the Wheat Board Building, the Winnipeg Auditorium, and the Victory Building.

Leonid Molodoshanin, known as Leo Mol, was a Ukrainian Canadian sculptor. He was born in Polonne, Ukraine in 1915, which was part of Russia at the time. His interest in sculpting began at a young age. He began learning from his father, who owned a pottery shop. Mol went on to study sculpting at the Leningrad Academy of Arts from 1936-1940. As an adult he moved to Germany and later the Netherlands before settling in Winnipeg.

Mol donated a large collection of sculptures, paintings, drawings to the City of Winnipeg. The Leo Mol sculpture garden at Assiniboine park on June 8, 1992. Mol and his wife both attended the opening. Leo Mol died in 2009. During his life he was inducted into the Order of Canada, and received numerous honourary degrees.

The Leo Mol Sculpture Garden is a short walk from the pavilion, and is a very popular spot in the park. The garden is also home to the Leo Mol School House Studio. The interior of the School House has been maintained intact and has molds and plaster cats of some of Mol’s major works. This allows visitors to gain a glimpse into the process of creating a bronze sculpture. The Sculpture Garden is great place to relax and view world class art from a Winnipeg artist.

The Assiniboine Park Zoo was established in 1904. began with animals native to Manitoba like deer, bison, and elk.

Today, The Assiniboine Park Zoo has undergone huge renovations and has animals from all over the world. It has hundreds of mammals and birds, and dozens of reptiles.The zoo made headlines with the construction of its new Journey to Churchill Exhibit. Journey to Churchill features exhibits of arctic animals, including polar bears, arctic fox, wolf, musk ox, caribou, snowy owl, and seals.

Assiniboine Park Zoo is one of only five zoos in Canada that is accredited by The Association of Zoos and Aquariums. The association has an accreditation program that has guidelines for all aspects of how a zoo operates, including animal care, animal transportation, and the nature of animal/human contact. The zoo must pass a full inspection before it can become an accredited member.

This week, Heritage Winnipeg was pleased to attend a fundraiser at the park to support the creation of Canada’s Diveristy Gardens. The Diversity Garden will be the final step in Assiniboine Park’s rejuvenation.

Assiniboine Park says the gardens will offer “an exploration of the human connection with plants and nature will showcase our nation’s extraordinary multicultural heritage. Visitors will discover the role plants have in shaping the life and identity of their community and their country – past, present and future.”

Learn more about the Diversity Gardens.