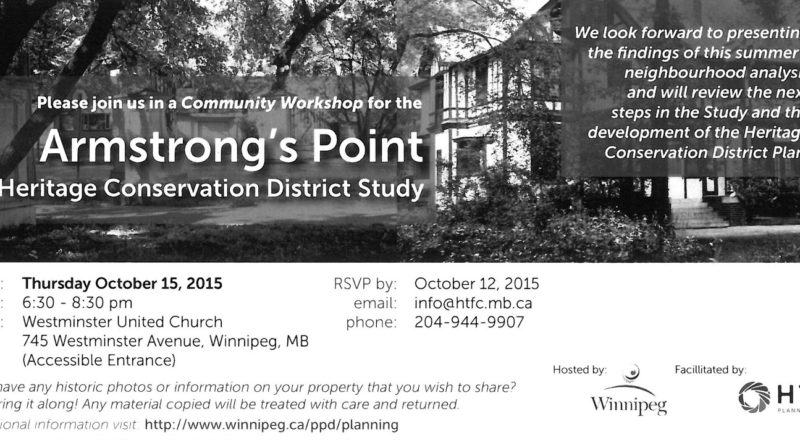 Armstrong’s Point: A Heritage Conservation District In the Making

Plans are underway to designate one of Winnipeg’s oldest neighbourhoods as the City’s first residential Heritage Conservation District (the Exchange District is another area that has this designation). The City of Winnipeg has completed a Heritage Conservation District Study for the area and the next phase will yield a plan proposing ways to conserve, protect, and celebrate the neighbourhood’s distinct historic character.

There are many reasons why Armstrong’s Point was chosen to become Winnipeg’s first residential Heritage Conservation District:

1) The Unique Layout and Configuration

Prior to European contact, the area was a gathering spot for Indigenous inhabitants. For a time, a Metis man named Joseph Peltier (Pelletier) established a camp there and thus, until the late 1840s, the peninsula was known to local residents as Peltier’s Point.

In 1851, the Hudson’s Bay Company granted the land to Captain Joseph Hill. When he was ordered to England for the Crimean War in 1855, he left his batman, Private James Armstrong, in charge of the property. Armstrong did not hear from Hill for several years and in 1873, he sold the land to Francis E. Cornish, soon to be Winnipeg’s first mayor, for $1000.

Armstrong died in 1874 but his son Elliot continued to live there. During their tenure, the area came to be known as Armstrong’s Point. In 1880, Hill, having learned of escalating land values in Western Canada, returned to Winnipeg and re-established title to his property. In April of 1881, he sold it to land developers for $24,000, although the local press inflated the sale price to $28,000.

The first home was built in 1882 and still remains, now known by the address 147 East Gate. Most of the large homes that give the area its distinctive character were built between 1882 and 1920.

2) The Long Association of Armstrong’s Point with Prominent Winnipeggers

The builders and buyers of the impressive new homes in Armstrong’s Point were some of Winnipeg’s leading citizens. The families of important merchants, businessmen, lawyers, architects, engineers, doctors, dentists, and educators all made their homes there. Names such as Bannatyne Eden, Stobart, Kaye, McMeans, Sutherland, Tupper, Riley, Ryan, Waghorn, Ruttan, McIntyre, Glasgow, and Blair are still recognized today as important founding families of Winnipeg.

3) The Protection of Significant Historical Assets

One of the main reasons for designating a community as a Heritage Conservation District is to protect its historic assets and conserve and celebrate the neighbourhood’s significant character. Since the beginning of Armstrong’s Point as a residential community in the late 19th century, several important buildings have been lost.

The Lost Treasures of Armstrong’s Point

A. G. B. Bannatyne was an early Winnipeg merchant, philanthropist, and politician who built a large home at 158 West Gate in 1883-5. It originally cost over $38,000, had 30 rooms, and was constructed of local limestone trimmed with red sandstone imported from Duluth. Bannatyne ran into financial difficulties and was deeply in debt when he died in 1889.

His widow, Annie, was the Metis daughter of another prominent merchant named William Isbister, and lived in the house until 1899 when it was sold to James Stewart Tupper. Tupper was a prominent lawyer and the son of Sir Charles Tupper,  a one-time Prime Minister of Canada. He named the home Ravenscourt.

Tupper’s widow lived there until 1929 when it was rented for use as a boys’ school, called Ravencourt Boys School. In 1935, growing enrollment at Ravenscourt forced the school to move to a larger and more suitable site in the Wildwood area of Fort Garry. The home was then rented by a girls’ school, the Convent of the Sacred Heart, who stayed until 1949 when the City of Winnipeg seized the home for property taxes. Soon after, the City demolished the home.

The home at 86 West Gate was built in 1901 for W. Rockley Kaye from a design by architect Walter Chesterton. This copy of an English country house was described in a 1989 report of the City’s Historical Buildings Committee as having been “one of the area’s and the city’s most beautiful homes”.

The Cornish Bath at West Gate and Cornish – Demolished 1931

The Cornish Public Bath, a public swimming pool, was built at the same time as the Cornish Public Library in 1915. The site for the two buildings and the surrounding parkland were once occupied by the Winnipeg Water Works Company, which in 1882, started drawing and distributing water from the Assiniboine River. Although the Cornish Library has just celebrated its centenary, the Cornish Bath had foundation problems from the time it was built. It closed in 1929 and was demolished in 1931. The northbound span of the Maryland Bridge now covers the former site of the Cornish Public Bath.

A consulting group called HTFC has completed its study of the historic Armstrong’s Point community. The findings and recommendations of the Heritage Conservation District Study will now be submitted to the City of Winnipeg and, if approved, the Armstrong’s Point HCD Plan will be prepared.


According to the consultants, “the HCD Plan content may include policies and guidelines concerning future alterations to existing properties and new construction, landscape and streetscape elements, views and vistas, the tree canopy, and public works, etc. In addition, the HCD Plan will include an implementation section that outlines any necessary changes to the City of Winnipeg’s development procedures, regulations, and capital programs”.

Before too long, Winnipeg may soon designate its first residential Heritage Conservation District designed to conserve and celebrate the unique and very special neighbourhood known as Armstrong’s Point.

Guest Post by and images courtesy of Pat Thomson, resident of Armstrong’s Point.
Edited by Laura McKay, on behalf of Heritage Winnipeg.
To follow up on this, or any other articles on the blog, contact Heritage Winnipeg’s Executive Director.

Like what you see?
To receive email updates from the blog,